Mercy is an undergraduate student persuing Computer Science. She is interested in learning new things, sharing ideas and most importantly writing clean code. Currently, Mercy is learning AI and Machine Learning. Beside programming, Mercy likes to spends her time singing.

Most developers know how to write software in Django. However, only a few can write readable code.

For this reason, we need to follow some of the conventional best practices to write code that is maintainable and readable.

To get started, we need to set up the virtual environment where we will develop the project.

Use the command below to set up the virtual environment. This command will only execute if you have virtualenv installed on your computer.

Next, we need to add a dependency manager. Usually, we use pip and the requirememnts.txt to manage our dependencies, but in this case, we will use a different library called poetry.

Poetry is a packaging and dependency management tool that manages the project dependencies in a deterministic way.

The problem with the requirements.txt file is that when we run pip freeze > requirements.txt, it gets filled with other packages that we do not need to specify explicitly. Besides, Poetry writes a poetry lock file which prevents the packages from self-updating.

To install Poetry, run the following command in your terminal:

After a successful installation, execute the command below to kickstart the project with Poetry:

Fill in the required prompts or press enter to continue with the defaults. The step generates a project.toml file like the one shown below:

Now that we have poetry set up, we can install any dependency we need for the project. Let’s start by installing Django. 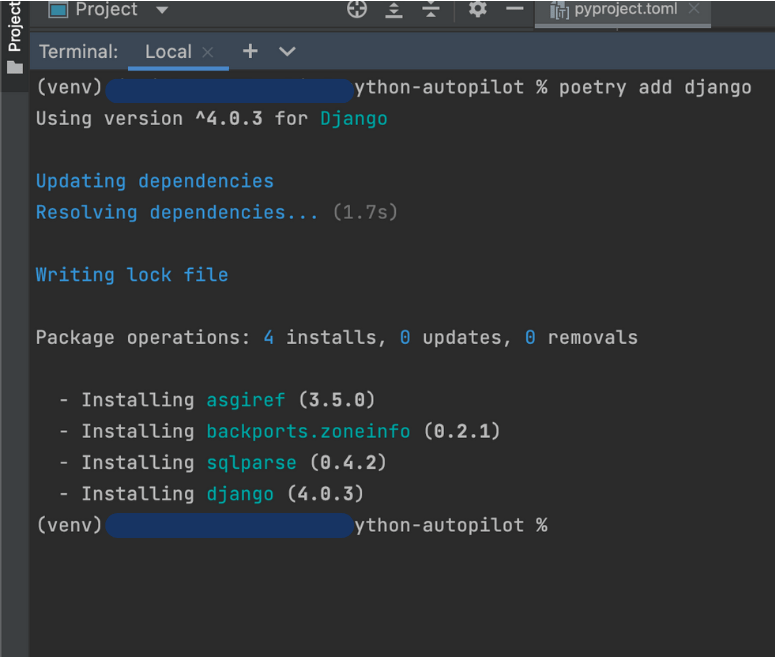 We will install other dependencies the same way as we proceed with the article.

This section will create the Django project and a single application in the project. Execute the command below to start a Django project.

I prefer calling this project config because it mainly contains the configuration files for the Django project; not much code is written in that folder.

Next, we need to create a REST API application that allows users to create posts and view them in JSON format. This application will be entirely back-end-based. Therefore, we will not have templates.

Run the command below to start the application:

By now, the project folders should be as shown below: 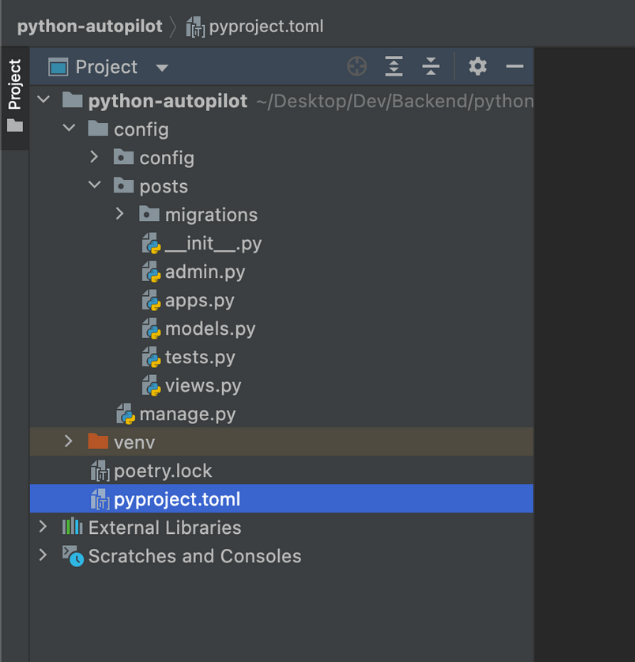 Setting up the REST Framework

Django REST framework is a toolkit used to build APIs with ease. It provides classes for data serialization, making it easy to convert Python data classes into JSON data objects.

To install the Django REST framework, run the following command:

Then, head over to the settings.py file in the config folder; under the installed apps section, add the following line of code:

Working on the application

We will create the models, serializers, views, and URLs. The models are data classes that specify how we store data in the database. In the models.py folder, add the code below:

Serializers convert the data classes represented by the models into JSON data objects. Create a file in the posts folder called serializers.py, then add the snippets below:

The urls.py is where we specify what resource to access when a given url is visited. In the urls.py file existing in the config folder, add the following code:

Then, create a new file in the posts folder called urls.py and add the snippets below:

Next, we need to create and run our migrations to create tables in the database:

Run the server using the command python manage.py runserver, then head to the http://127.0.0.1:8000/ link to check if everything worked correctly. 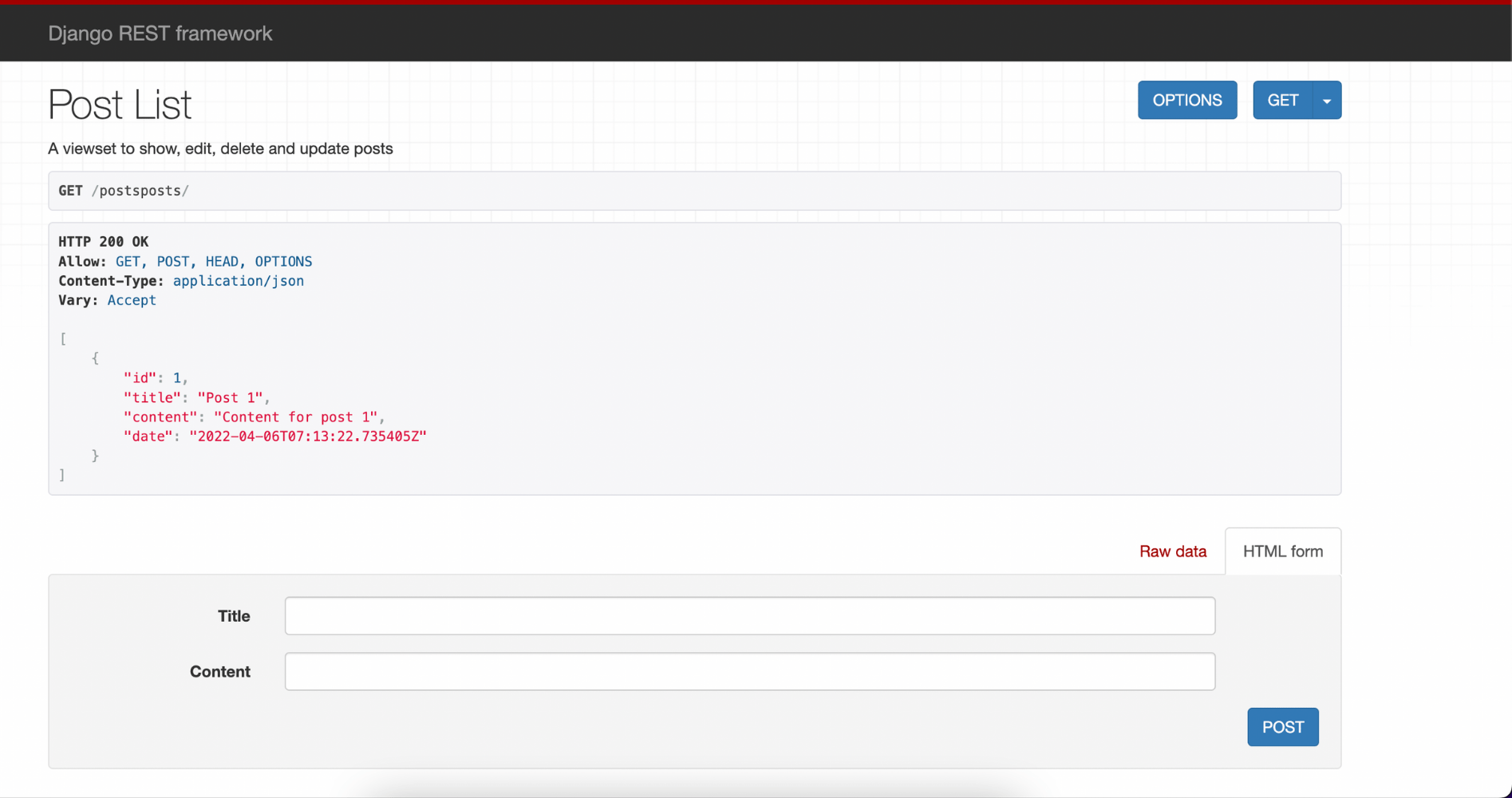 Setting up the automation

To get started, we need to know what we want to automate. Then, we should set up an application such that the code is automatically tested and formatted for every commit made.

This setup is done using pre-commit. So first, we need to install pre-commit into our application using poetry as a development dependency.

Next, we create a pre-commit configuration that defines what should be done before an actual commit. This setup is called pre-commit hooks.

Create a file called .pre-commit-config.yaml, then paste the following code into it:

Next, we need to set up pre-commit to run on git hook scripts so that it runs on git commit.

Note that the above command only runs after initializing a git repository for the project.

To install black, execute the command below in the terminal:

Black comes with automated configurations, but we can modify them according to our needs. However, the default settings are the best since they align with PEP8 standards.

Since I prefer having the length of my lines of code as 100, that’s the only change I will make in the configurations.

Flake8 will take care of testing and code pre-checks. In addition, it eliminates identified errors and unused imports, functions, and variables contributing to a cleaner code. To install flake8 execute the command below:

Next, to automate flake8 so that it is triggered every time we make a commit, we add it as a hook to the pre-commit, as shown below:

Flake8 also has a line length defined by default. To avoid collision with the black settings, we defined the line length as similar to that of black.

Many hooks can be added to the file depending on the developer’s needs. You can find more hooks here. 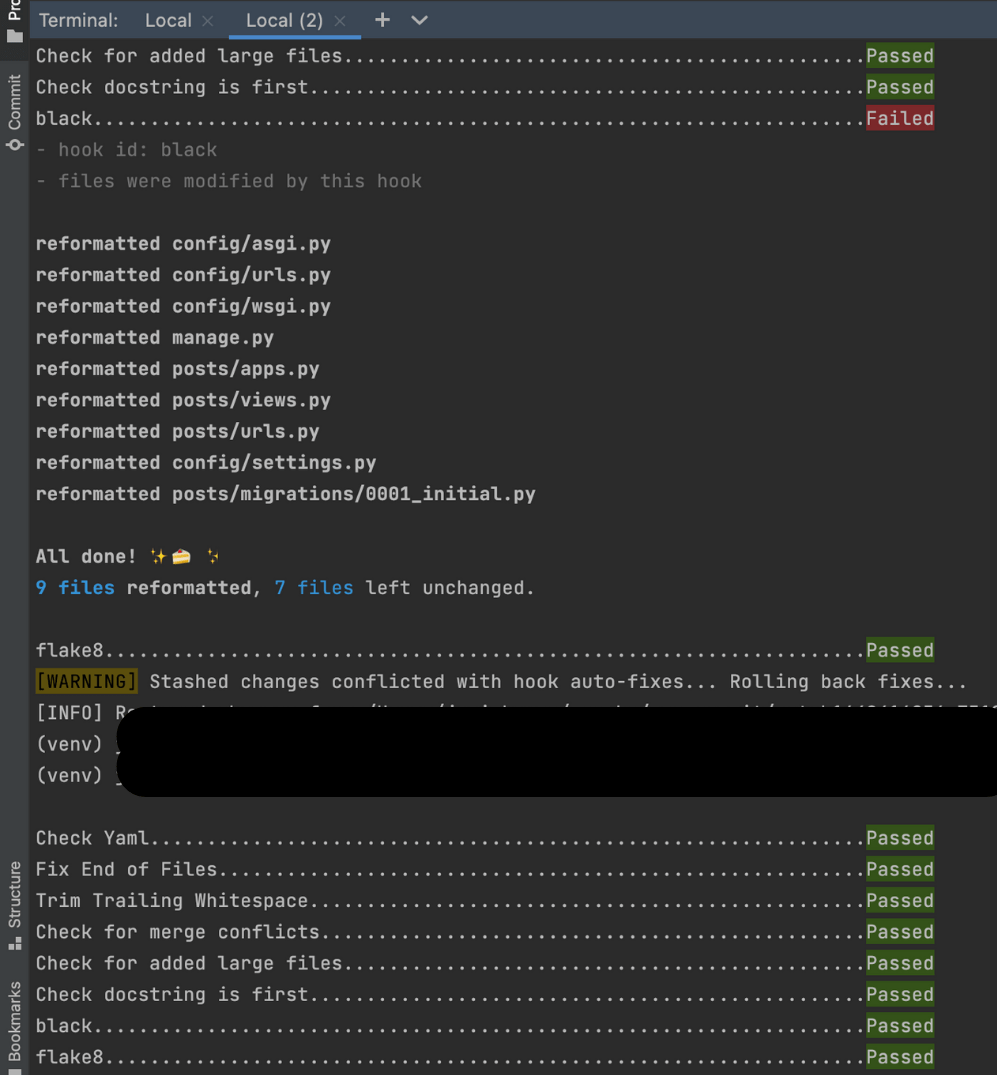 Github Actions allow developers to automate most workflows for their projects. It is a form of CI/CD where one can automatically build, test and deploy his code.

To set up GitHub actions, create a folder called .github in the application’s root directory. Then, create another folder named workflows in the created folder where we will set up our workflows.

Create a new file called automated-testing-workflow.yaml, then add the snippets below:

The code above specifies the test, the platform on which the code is to be executed, and the Python version.

Next, we need to check out the repository and set up Python versions onto which we run the tests.

Next, we have to set up the flake8 testing. Although we did this locally, we have to assume that the developer did not do any test, so before a pull request is merged, we perform the same test we did locally.

When we run a commit, all the above operations are automatically performed on our code before the code is committed to GitHub.

This article discussed some of the best practices required while writing code, especially in Django. We set up project management with Poetry to ensure that our dependencies are deterministically managed and locked from a self-update.

We went further and set up automated code formatting using Black. This tool formats our code in a readable manner. Together with Flake8 testing, Black ensures that code is written according to PEP8 standards.

Lastly, we hooked up everything into a pre-commit such that all the testing and formatting are automated for every commit made to the repository.

You can find the code for the application in this link.