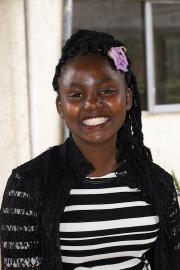 Giathi Phelomena is a Computer Technology student at Jomo Kenyatta University Of Agriculture and Technology. Her interests are web development and networking. She has a great passion for developing web applications and configuring networks.

This article will cover Diffie Hellman’s (DH) key exchange algorithm, which involves deriving the same key from both sender and receiver. Additionally, we’ll cover the concepts of the Elgamal encryption algorithm by using DHKE generated keys.

To follow this tutorial along, you need the following:

By the end of this article, you should have a basic understanding of generating keys using Diffie-Hellman algorithms, and encryption/decryption using the Elgamal algorithm.

Getting started with asymmetric encryption

Asymmetric encryption is also known as public-key encryption. It involves enciphering information by a sender and deciphering it by the receiver using keys. Each party has its public key to share with the world and a private key that they must keep secret.

Even though an adversary may know the encryption key, they cannot decrypt the message. However, using their secret key, the receiver can decrypt the ciphertext.

Public key encryption is an attempt to curb the following problems faced by symmetric encryption:

Key distribution under symmetric encryption requires that either:

If the use of cryptography were to become widespread, not just in military situations, but for commercial and private purposes, then electronic messages and documents would need the equivalent of signatures used in paper documents.

Asymmetric algorithms rely on one key for encryption, and a different but related key for decryption. Therefore, these algorithms have the following important characteristic:

Modular exponentiation is the remainder when an integer B (the base) is raised to the power e (the exponent), and divided by A positive integer M (the modulus); that is, C = Be mod M.

Most technological applications of modular arithmetic involve exponentials with very large numbers. For example, a typical problem related to encryption might involve solving one of the following two equations:

The answers to the questions above are not as obvious as we may assume from the equations. It is not even clear how we would go about determining a and b.

The first equation is relatively easy for computers to solve. However, there is no known way of efficiently solving the second problem.

Note: It’s very hard to compute pe, then divide by m and find the remainder because pe is a very large number.

Despite the difficulties discussed above, it is essential to find the modulus of pe mod m where p, e, and m are very large integers.

Therefore, the computation can be done using an algorithm that employs the binary expansion of the exponent e, reducing the value given (p) using the binary form of e and finally computing the modulus of the value in each step.

Let’s look at an example:

To compute the modulus of 3^9 mod 5 using the modular exponentiation, let’s follow the steps below:

As we’ve learned above, modular multiplication allows us to keep the intermediate result at each step. Here’s the implementation of a simple repeated multiplication algorithm for computing modular exponents this way:

The implementation above is much better than the naive algorithm, but it’s pretty slow, requiring b multiplications (and reductions modulo n).

We can apply the modular reduction rule to the more efficient exponentiation algorithms.

The code above has the right-to-left method with modular reductions at each step. We use the same algorithm but reduce every multiplication. So the numbers we deal with here are never very large.

We could as well implement the left-to-right method as shown below:

And with _bits_of_n being, as before:

Note: Exponentiation and modular exponentiation are one of those applications in which an efficient algorithm is required for feasibility. Using the trivial/naive algorithms is possible only for small cases which aren’t very interesting. One needs powerful methods in his toolbox to process realistically large numbers (such as the ones required for cryptographic algorithms).

As we have discussed, cryptography provides secure end-to-end communication by employing encryption and decryption. The encryption algorithm converts the input (plaintext) into an encrypted output (ciphertext) using a key.

The key must remain secure and unknown to the attacker for the system to stay secure.

A key exchange protocol is used for symmetric cryptosystems to establish the shared key by communicating it over an insecure channel, requiring no previous connections.

For example, if Alice and Bob want to exchange encrypted messages, Alice and Bob will not need to meet in person secretly to share the key. Instead, they can use an insecure channel effectively and share the key using the Diffie-Hellman key exchange protocol (DH protocol).

DH protocol involves exchanging secret/asymmetric keys between sender and receiver using asymmetric encryption (public and private key). It can be abbreviated as DHKE.

The encryption key on the sender should be equal to that of the receiver, as shown below:

The security of the DH Protocol relies on the fact that the functions X and Y are one-way. It is computationally infeasible to calculate the corresponding keys for an attacker who knows the leaked values of X and Y.

Although the DH Protocol is safe against passive attackers, it is vulnerable to active attackers who can modify messages and interfere with the shared key.

Application of DHKE in ElGamal

Diffie-Hellman enables two parties to agree on a common shared secret that can be used subsequently in a symmetric algorithm like AES. Neither of the parties can tell beforehand what the secret will be, only that once they are done, they both end up with the same number.

It involves the following components:

The key generation process involves the use of the DHKE process as discussed previously, that is:

Suppose A generates a key pair as follows:

Assuming B wants to send a message that read 17 to A.

A uses the public key of B to recover the key

Now that we’ve understood the algorithms for key generations using DHKE. Let’s proceed and see how we can implement the same using Python programming language.

In your project root, run the following commands to install the Diffie Hellman package:

Now that we have pyDHE ready, let’s proceed to implement our Diffie Hellman algorithm:

On execution of the code above, two 2048-bit public keys (for John and Doe) are generated and printed. Assuming that John and Doe have exchanged their public keys. Once John has received Doe’s public key, she can calculate the shared secret by combining it with her private key and vice versa. The sample output below shows that the shared secret is always the same number (2048-bit integer):

It is essential to note that your output will be different from the output above due to the randomness of the generation.

In conclusion, it is apparent that security plays a vital role in data communication. Using Diffie Helman and Elgamal encryption algorithms seems to solve the problem of key distribution as the sender and receiver can generate the same key hence throwing key distribution out of the equation.