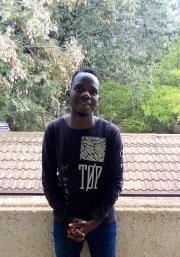 For a data packet to be appropriately transmitted on a network, it needs to be converted into the best and most reliable way of transmission. For this reason, data is encoded in a way that is best understood by computers.

Data encoding is the conversion of data into digital signals i.e. zeros and ones.

This tutorial intends to cover how data to be transmitted on a network is encoded. It will emphasize more on the different data encoding techniques. It will also talk about digital and analog data.

For data to be encoded, it has to be converted to signal variations.

These signal variations include:

The types of encoding techniques include:

Non Return to Zero signal involves both the positive and negative voltages. NRZ-Level and NRZ-Inverted are the two variations of Non return to zero scheme.

In Non-Return to zero Level, also abbreviated as NRZ-L, level of voltage determines the value of a bit. We take positive and negative voltages to represent bit 1 and 0 respectively.

The first bit is 1, and in relation to rule, bit 1 is represented by a positive voltage. In this case, we draw a straight line at positive level.

The bit that follows is a 1, represented by a positive voltage. Therefore, we draw a straight line at positive level.

Bit 0 follows after bit 1, therefore, we draw a straight line at negative level.

The same process continues until all the bits are recorded.

If we connect these lines, we have our signal in NRZ-L scheme.

Let us look at an example.

We consider the same data as before and assume that the signal was at positive level before time 1.

For bit 1, we know that there will be a change in the signal level. Therefore, the signal will shift to negative level.

For the next bit 1, there is a change in the signal level. Since the current level is at negative, we will draw the signal at positive.

Next bit is 1, so we move from positive to negative.

Next bit is 1, so we have to change the level again, and hence we draw the signal at negative.

Again, we have 1, so we change the level again and go from negative to positive.

Finally, we have bit 0, meaning there won’t be any change in the signal level. Therefore, we continue the signal at positive.

Next bit is also 0, hence no change.

We get the waveform below after encoding:

Although baseline wandering is a problem for both variations, it is twice as severe in NRZ-L.

The synchronization problem also exists in both schemes. Again, this problem is more serious in NRZ-L than in NRZ-I.

However, NRZ-I does not have this problem because in NRZ-I bit value is not determined by voltage level.

The clock synchronization is taken from the signal; hence it requires a greater bandwidth. The two types of Bi-phase encoding are Differential Manchester and Bi-phase Manchester.

In differential Manchester, a transition occurs whenever there is a zero in the middle of the bit interval.

A voltage of signal 1 which is a high voltage starts from the top.

Now that the next bit is zero, there is a transition, and the signal starts from the top again. The same procedure is followed until all the bits are recorded.

The figure below is the resultant encoded signal:

This is challenging because, whenever we find a zero, we go back to the other side and then come back again to the same side.

We have to remember that we always start from the positive side. When we find a zero, we go to the other side and then we make a transition and come back to the same side.

Here, a transition is done in the middle of the bit interval. The resultant pulse of the transition is from high to low when input is 1 and vice versa for input 0.

The first bit is 1, so we start at the top to the middle. When it is zero you start from the bottom to the middle as shown in the figure below: 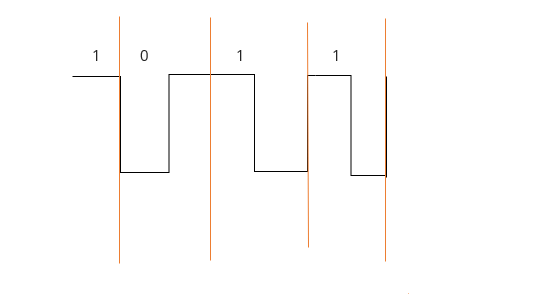 For clock synchronization to be achieved, redundancy is needed for error detection. This redundancy can be achieved by block encoding to improve performance.

This type of encoding changes a block of x bits into a block of y bits in which the y bits are more significant compared to the x bits;referred to as xB/yB encoding.

Division - In this step, a group of bits is divided into x bits.

Substitution - This is the main step; x bits are substituted for the y bit group.

Combination - Here, the y bit groups are combined to form a stream. The newly formed stream has more bits than the original bits; hence more data is sent.

The two types of block encoding are; 4B/5B and 8B/6T encoding techniques.

Like in Manchester encoding, clocks with double speed are required to send data.

In this type of encoding, double speed clocks are not required. Instead, 4 bits of codes are mapped to 5 bits; having a minimum of 1-bit in the group.

Double speed clocks are avoided by assigning 5 bits in place of 4 consecutive bits, which are pre-determined in a dictionary.

Hence, transmission occurs as a block of bits.

Two voltages have been used to send data in the previously described encoding techniques. What if we use more voltages like 3 volts or more? Can we send more data? The answer is yes.

For example, if we use 6 volts levels to represent 8 bits for a single signal, we term the type of encoding as 8B/6T encoding.

From this article, we learn that when Block encoding is used to encode data, more bits are sent on a network; hence it is more reliable.

Block encoding is also more efficient since no double clocks are needed to send data; hence there are no effects of poor clock synchronization.

As discussed above, in Non-Return to Zero encoding, we realize that NRZ encoding is not a better way of encoding data for transmission due to lack of clock synchronization; hence the receiver might get a wrong message.

For reliable transmission, digital data is typically converted into digital signals using the techniques that we’ve studied so far.

This article enlightens you to understand better Bi-phase encoding, Block encoding, and Non-Return to zero encodings.

You have understood the different types of Bi-phase encoding, both differential and Bi-phase Manchester, and encoding a message in both types.

You should be able to know the demerits of the Non-return to zero encodings and know a good method to encode a message for transmission i.e. Block encoding.