Queenter Bruce is a computer science student at the Technical University of Mombasa. She does Artificial Intelligence and Machine Learning. Her hobbies include reading novels, playing football, and traveling.

Design and Comparative Performance Analysis of P, I, D, PI, PD, and PID Controllers in Matlab

Design and comparative analysis involves the construction of various controllers. These controllers are then analyzed deeply to get the difference depending on their properties.

These properties are then analyzed to see their merits and demerits. Also, we analyze their performance to get their efficiency.

In this tutorial, we will look at the various types of controllers. This includes the theory and property of these controllers.

The types of controllers that we will cover are such as proportional, integral derivative controllers and combinational modes. We will alos look at how to design these controllers using Matlab. 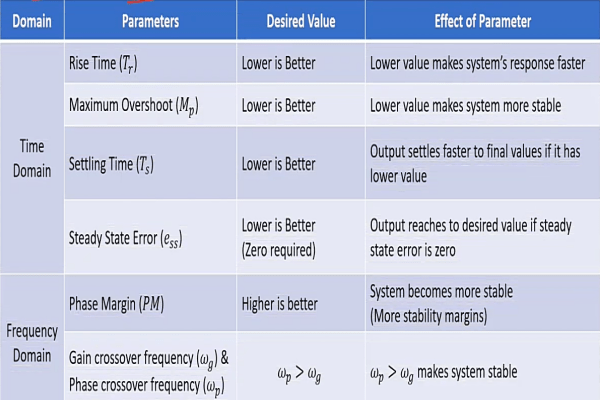 A controller is introduced with the main plant transfer function in the feed-forward loop as shown below: 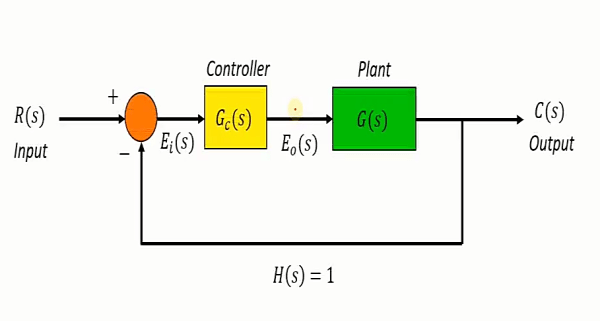 Here, we have the plant(Gs) we want to modify to attain certain requirements. The controller is used to change the response of the plant.

There are two types of continuous controllers.

Let us now take a look at these controllers.

A proportional controller is simply an amplifier. Its transfer function is Gcs = kp. It does not add any new pole or zero to the system.

The controller can be represented as shown below:

$e_j(t)$ is the input error and $e_o(t)$ is the output error. $E_j(s)$ and $E_o$ are the frequency domain representation. The time domain equation is:

The frequency-domain equation where you can find the transfer function is:

With P-controller, the response of closed-loop systems becomes faster, but maximum overshoot also increases. The large value of kp can make the system unstable.

The plot below shows the system response with the controller and without controllers:

Its transfer function is $Gc(s) = \frac{kj}{s}$ because of the integration. It adds a pole and hence increases the order system by one. The time-domain equation of the controller is shown below:

The frequency-domain equation is:

With I-controllers, the offset error of the P-controller is removed. Also, the steady-state error in step response is eliminated.

The performance comparison is as shown below:

As we can see above, a stable state is achieved. The rise time(Tr) has decreased, and the response is slightly lower. Also, there is a slight increase in the maximum overshoot.

It’s transfer function is $Gc(s) = k_d.S$ because of the differentiation. It adds a zero to the system. The time-domain equation is given by:

The transfer function $Gc(s)$ is given by:

Also, if the error $e_i(t)$ changes suddenly, then the controller’s output will be impulsive. This impulsive output can cause a sudden act of the actuator. This sudden act can cause a breakdown of the system components.

Due to P-controllers, the response becomes faster due to the I-controller, and the steady-state error becomes zero. When $T_j$ is increased, the damping factor also increases; therefore, large oscillations due to P-controller can be made smaller.

The comparative response is shown below:

Also, to achieve the desired response, we must fine-tune the PID controllers to find optimal values of kp, Td, and Tj. The performance comparison is shown below:

You can create the different controllers and connect them in parallel form to get the PID controllers, as shown below:

For a proper understanding of the background equations involved in the design of the controllers, the transfer function, they can be found here

Controller design and tuning and Matlab

In control and designing these controllers, matlab has a function pidtune(). The syntax is:

Example of how to use the syntax is shown below:

Design focus has two options, that is, reference tracking and disturbance-rejection. Here, tf() function gives the transfer function, PidtuneOptions() gives the tuning option and the pidtune() gives the design.

In implementing the controller in Matlab, we first define the system open loop system known as the transfer function and the system closed loop.

The closed-loop provides feedback but without a controller. It means that the feedback is not controlled.

Let us now design our controllers. We will begin with the PI-controller.

To design the PI-controller, we use the code below:

In the design of the PI-controller, we use the pidtune() function. This function takes the open-loop system and the type of the controller we are designing, PI-controller, as the arguments.

Computing the step response is done by the code below:

We can now plot the output of these responses in subplots as shown below:

To do this, we use the code below:

We make the plot of the step response using the step() function. Legend is created using legend() function. The legend shows the representation of each plot.

This legend should not be attached to any of the plots. Boxoff does this. Now, when we run our program, the output will be as shown below: 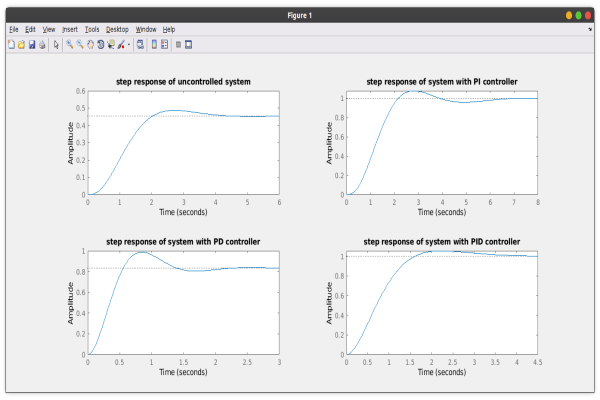 Plot of the step response of different controllers 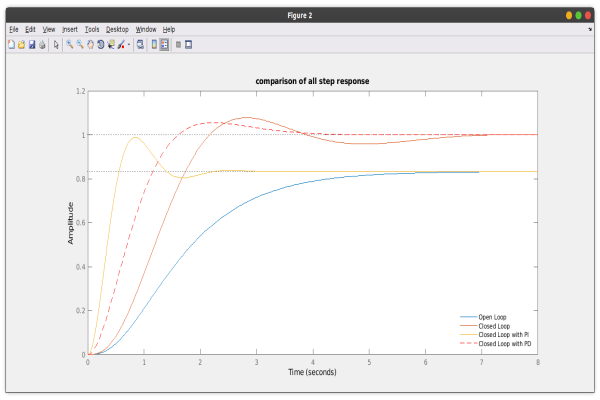 Plot of the response of different systems

Suppose you look at the workspace to see the program’s output you have displayed. Here, you get the transfer function of the closed-loop system.

Controllers form an important part of a system. A good controller is required for a system to operate effectively.