Florence Akinyi is a Computer Science undergraduate with a passion for the magical field of Computer Science. She holds interest in exploring various fields of CS ranging from web and app development to Artificial intelligence and Cyber-Security. She loves getting lost in the world of books and in the beauty of nature. In her free time she engages in community works.

Signal denoising is the process of removing the available noise in a signal. Signal denoising application is widely used in various fields. Using an app designer, we can create an app that does this.

An app designer is a development environment with an interactive user interface for the layout design and programming of the behavior of apps. In addition, it has a layout grid manager. It allows you to organize your components. It also has automatic reflow options that detect and make changes to your application depending on the screen size.

This tutorial will look at how we can use an app designer to create a simple app. First, we will look at the various components used by the in-app designer and how to write their callback function. Now we will use their methods to create an App to denoise input 2-D signals and view the outputs.

To fully understand and follow along with this tutorial, the reader will require:

App designer is a readily available toolbox in Matlab. You can create interactive Apps using this toolbox. To access the App Designer in Matlab, you can execute the command below in the command window:

This command opens the interface that you will use in the design of your app. The interface is as shown below: 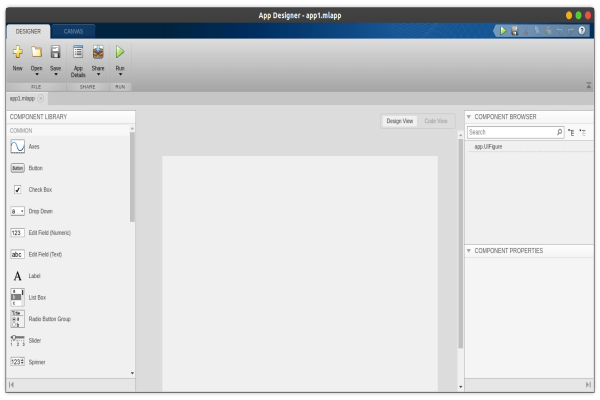 The interface is divided into sections. These sections are as shown in the image above.

Let us look at every one of them.

3. Components browser - In this section, you can search for the components added to your layout.

4. Component properties - In this section, you modify the properties of the components. This could include changing the text, background color, font size, etc. All the modifications for the components are done here.

The properties are as shown in the image below: 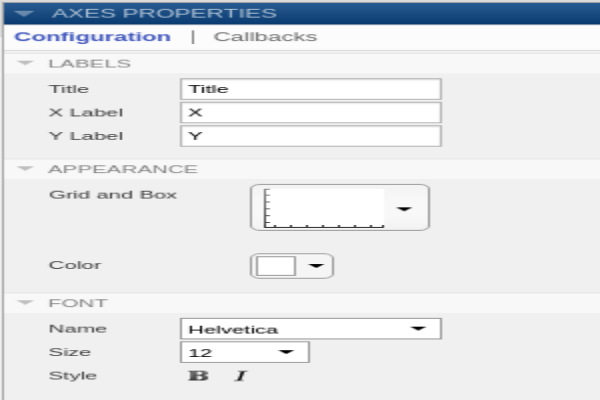 5. Canvas- In this section, you create the various components’ alignment, grouping, etc. Then, when you select the designer sections, it provides you with the app details and shares your apps.

How to create a denoising application

We want to create a denoising App. This app will allow you to select your input image from your PC. Then, this image is displayed, and to this image, noise is added, and now this image is denoised.

The design of the image should be as shown below: 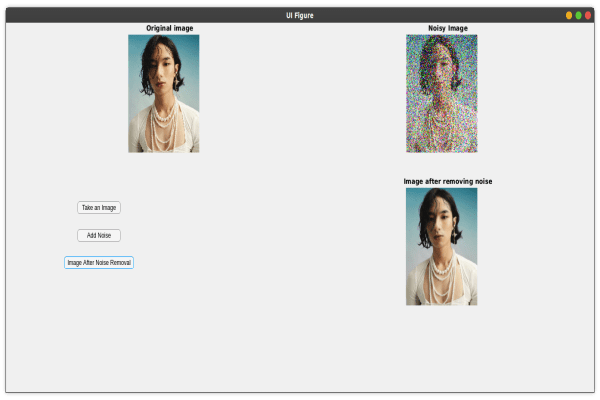 When we click on the add image button, it opens the dialog that allows us to select the input image. Next, the add noise button is used to add a button to the input image, and the third image performs a denoising process.

Steps of creating the application

We will perform a modification of our axes. These modification includes changing the title and the axes. Change the title of the first axes to original image, the second axes to noisy image and the third to image after removing noise. We can modify the text style, the font and the text size depending on our design. For now, we will leave the default values.

Since we are dealing with the images here, we do not need the X and Y labels. So we will delete them.

The output should be as shown below: 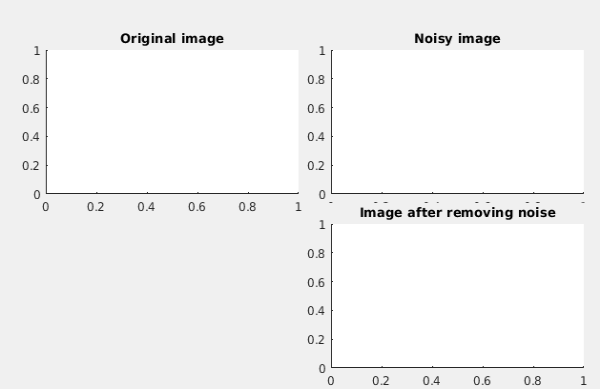 At this point, we will add three buttons. The buttons that input the image, the second adds noise to the input image, and the third removes the added noise.

The final output after adding the buttons should look as shown below: 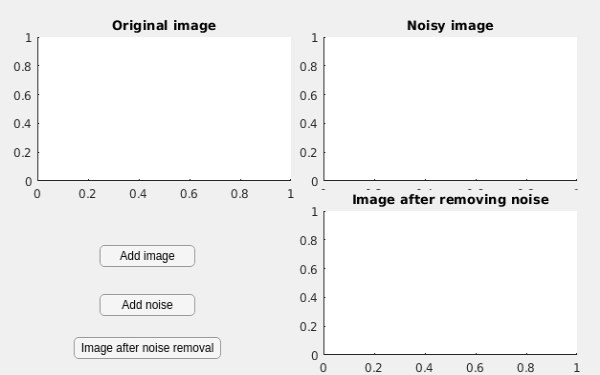 Above is the design that we wanted. Once this is done, Matlab automatically generates the code for our layout. To see this code, we select the code view option.

This section is as shown below: 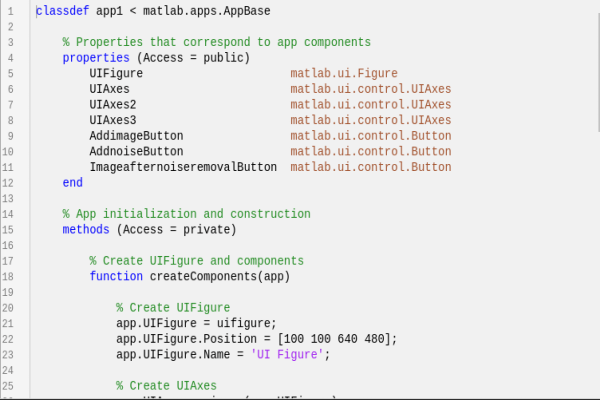 Now for the functionality of our application, we will add the callback functions.

It forms the most important part of the application. To add the callback function for our buttons, we will select the button and right-click.

This opens selections as seen below: 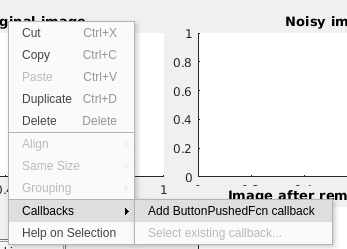 We then select the Add ButtonPushedFcn callback. It creates a function that will determine the action of our button.

The uigetfile() function opens the dialog that allows you to select your input image. This function gives the filename and the pathname as the input arguments. This Strcat concatenates the arguments.

The imread() function reads the input image and stores it in the a variable. We then show the input using the imshow() function. This function uses the read values of the image.

Since we require that this output be displayed on the first axes, we will define this. Set the first access to parent to define where to display the image.

The callback function for it is as shown below:

We use the imnoise() function to add noise to the input image. In this case, we add salt & pepper noise. The density of the noise is defined as 0.4. We then display the output using the imshow() function and specify where to display this image. It should be displayed on the second axes app.UIAxes2, which we set as the parent.

We will also make a the global variable here.

Finally, we add the callback function for the image after noise removal button. This button removes the noise from the denoised image.

The callback function is as shown below:

We then show the output using the imshow() function and set the parent to the third axes app.UIAxes3.

At this point, our application is now ready to function. We will save it and then run the program.

When we run the program, the output should be as shown below: 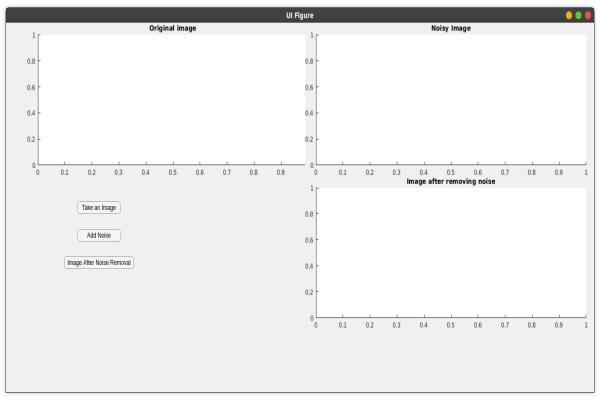 Let us test the functionality of our App by clicking on the buttons. When we click on the buttons, we should have the output shown below: 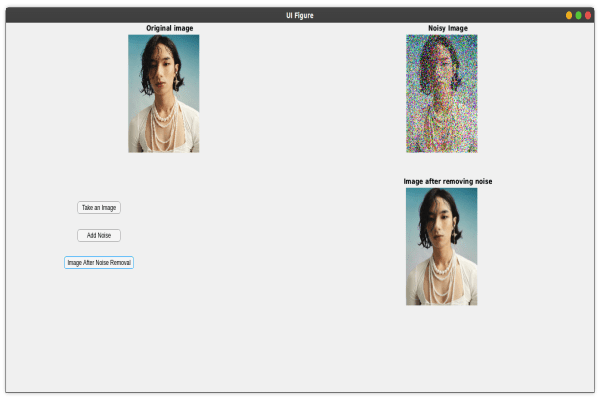 It means that our App works as required.

This shows how simple it is to create Apps using app designer in Matlab.

Using the App designer, we can create, share and even deploy our applications. This makes it a very important tool in the creation of applications. One advantage of this toolbox is that it is easy to use when designing the user interface. Furthermore, if you understand the program behind the various components, it is also easier to write the corresponding callback function.