Ruth Ngonyo is a Computer Science undergraduate with a passion for the magical field of Computer Science. She holds interest in exploring various fields of CS ranging from web and app development to Artificial intelligence and Cyber-Security. She loves getting lost in the world of books and in the beauty of nature. In her free time she engages in community works.

Creating a Honeypot for Network Security

Many companies rely on publicly available data to make critical choices in todays data-driven world. Web scraping is a common technique for obtaining this information from the internet.

However, web scraping has specific difficulties. The honeypot is an example of a trap. One of the most effective ways to deter hackers is to use honeypots. A honeypot system prevents attackers from their objectives. Unwanted behavior is often detected with the use of honeypots by security teams.

This article will discuss honeypots and avoid them when scraping the web for data.

Honeypots are classified into the following:

They are described below.

Design-wise, honeypots are classed as follows:

Pure honeypots are full-scale factories. The honeypot’s network connection has been bugged to keep track of the attacker’s activity. No additional software is required. In both cases, honeypots and honeypot-like systems, there are both advantages and disadvantages to using either method.

Most honeypots are found in a demilitarized zone (DMZ). A DMZ is a logical or physical subnet that houses and exposes an organization’s external-facing services to an untrusted, generally bigger network like the internet.

Web and email servers are accessible from the DMZ. A firewall separates the DMZ from the corporate network. An internal network is shielded from the outside world. It permits traffic to flow in key network areas.

The invaders think these fake servers are legitimate, but they are honeypots. So they follow well-established protocols and base their behaviors on real-world acts. Occasionally, simulated data is employed to improve the reliability of a piece of data. A honeypot may contain fraudulent credit card information or files that seem to have such data. The honeypot duplicates all routine access control procedures and protocols to protect the data.

Attackers see honeypots in the DMZ as a susceptible location. And the more convincing they must be. How long should a hacker stay in a honeypot? An attacker might want to remain in the honeypot and collect as much information about the target firm as possible to avoid detection. 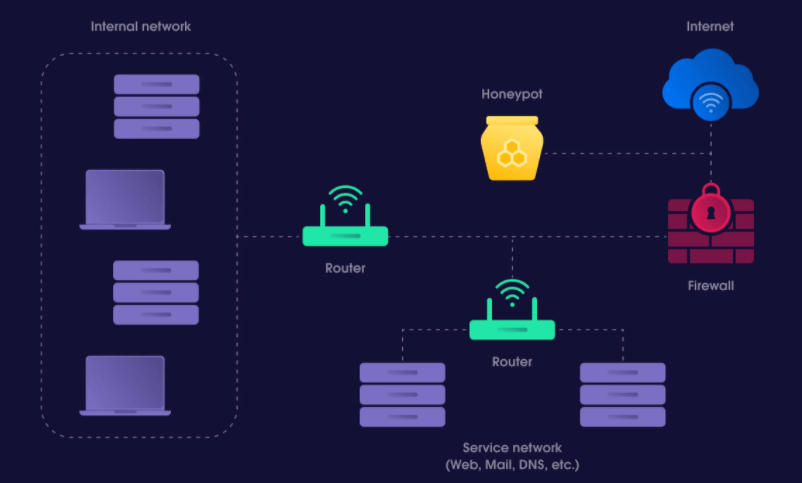 Let’s look at the merits and demerits of using honeypots.

Experts say honeypots function when other intrusion detection systems (IDS) fail. An IDS examines network traffic for signals of unauthorized activity and alerts the user. A network snoop monitors a system or network for dangerous activity or policy breaches.

While honeypots offer numerous advantages, they also have drawbacks.

These traps are also known as spider honeypots. Online crawlers are often the only ones who have access to the links on an online page, and their efficiency is not always optimal. The site classifies data scraping from these URLs as web scraping.

Online scraping behavior may be easily discovered and monitored using honeypot trap websites. Your access to public data may be restricted in the future. If you value your privacy, avoid collecting data from honeypot websites.

Some honeypot URLs use the CSS rule “display: none” to lure crawlers. Others are disguised by blending with the background. Crawlers can only follow links on the surface, keeping this in mind while creating connections. To prevent backlisting, adhere to web scraping best practices. Scraping data from a website involves following the site’s administrators’ standards.

The installation of honeypots is possible using commercial and free software. The four steps to setting up a corporate network security trap are:

Step 1: Start by setting up the honeypot software.

Step 2: Set up the firewall and logs.

Now, it’s time to pick what the honeypot will monitor: file modifications, login attempts, and other actions. The administration must provide more logging since hackers may modify log files. As a precaution, save the honeypot’s log files someplace unlikely to be hacked, such as the Windows logging tool or a cloud service.

The honeypot is in the DMZ, outside the firewall. The external firewall should only allow vital ports and block all others. These devices are ideal for diverting traffic from internal networks to public networks.

Step 3: Set up the honeypot

Unlike the internal firewall, the honeypot is a security concern. Offensive actors may access many ports. Don’t open all ports. Bypassing a crucial server requires leaving or exploiting the honeypot.

Step 4: Testing Nmap and other port scanners may be used to examine a honeypot’s settings. Assailants often do their port scans to find network weaknesses. An attacker may see what a hacker sees.

Before reading the server logs, honeypot administrators should do some honeypot activities. Any attempt to scan a port by an attacker will be promptly rejected by an IDS, which will show the port as unavailable and encourage them to go on.

Before launching a honeypot, these issues must be solved. Anything that can impede the honeypot from attracting attackers and collecting the maximum amount of data should be removed. After initial testing put the honeypot into production, monitor it closely, and fine-tune the arrangement.

Let’s look at some of the Honeypot software:

Honeypot traps have been used to catch cybercriminals for years. However, they may hinder web scraping. Don’t utilize honeypot traps to scrape publicly available data like price tracking or market research.