Dataset shift occurs when there is a change in the distribution of data. In the real world, socioeconomic factors may influence data distribution, along with varying consumer habits, and many other factors.

These factors can alter the underlying relationships between input and output data. As a result, the performance of a model can be (and will be) degraded. It’s worth exploring how to handle dataset shift.

A general understanding of machine learning (ML) is required. This post can provide an introduction or a refresher on ML.

The phenomenon of dataset shift is defined by a change in the distribution of data. This change is between the training sets and test sets.

When creating a machine learning model, we use training data to train a model with the expectation that when the same model is used on test data, it will produce similar results.

However, in the real-world deployment of machine learning models, this may not be the case. For example, consumer habits keep shifting. Therefore, the distribution of data will definitely shift also.

The consequence of such shifts is performance degradation of the model. To better understanding this drift of data, let’s glance at a couple of causes for this phenomenon.

Let’s discuss a couple of potential reasons for dataset shift.

Change of environments – also known as non-stationary environments, this refers to when a difference exists between the training environment and test environment. This could be as a result of a change of a spatial or temporal nature.

There are three major types of dataset shift.

We’ll explore each in detail. 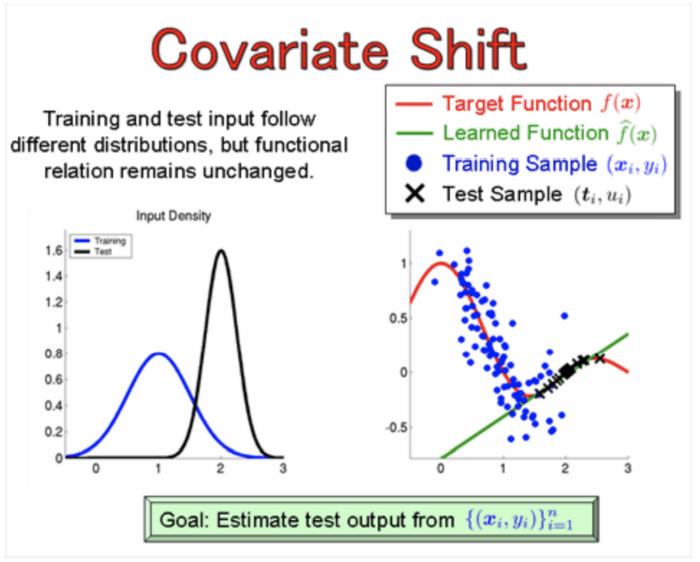 Covariate shift is the most common type of shift which is characterized by the change of the input variables existing in the training and test datasets. It may occur as a result of a change in the environment that only affects the input variables. The target variable remains unchanged. 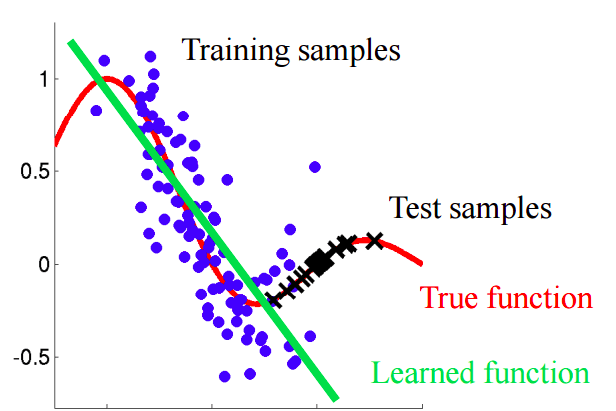 The change in distribution is problematic. Here’s why. From the image above, the learning function attempts to fit the training data. However, the distribution of the training and test data is contrasting. Using the learned function to make predictions, in this case, will lead to the wrong results.

Let’s give another example of how problematic this shift can be. Consider facial recognition algorithms. An algorithm that has been trained on faces that are mostly of younger people, but dealing with a dataset with a majority of older faces will definitely lead to wrong results.

Prior probability shift is characterized by a scenario where the target variable distribution changes but the input feature distribution does not. This is basically the reverse of covariate shift.

We can use the context of spam emails to better understand this type of shift. The contents of spam mail may vary over time. Their ratio to the total daily received email number may also vary. As a result, spam filters that were developed on emails received last month may not be quite as effective today as a result of a change in the traffic’s composition of the emails.

However, if in actuality about 75% of our mail is spam, the prior probability of the class variables has been altered. The effect of this does not influence the input distribution, but the output distribution.

For more on this type of shift, check out this book.

Concept drift is defined by the change in relationships between the input and output variables in the problem. It’s neither related to the data distribution nor the class distribution.

The relationship between input and output variables may be unknown or hidden. For example, the strength of the economy may sway consumer purchasing habits over a period of time.

Yet, economic strength is not clearly specified in the data. Another example is in the context of weather data. Seasons may not be clearly defined in temperature data, but ultimately influence the temperature data.

From the examples above, we note that this change in data can take any form. It makes it much easier to consider cases where there is some form of temporal consistency to the shift.

This would mean that data obtained during a given period would show the change in the relationship between input and output variables over time. Concept drift is more likely to manifest in various domains dependent on time, such as time series forecasting.

Dataset shift can be corrected in many ways. The three methods listed below are considerate of all three types of shift.

The gist of this method is getting rid of features that are deemed to be drifting. First, an acceptable level of the shift may be determined. Individual features may then be scrutinized to determine which features contribute most to shifting.

We may do this through a very specific scientific examination of the machine learning system in consideration, by training the model on a different set of dataset features to get insights into their impact on the outcomes. This is what we call a feature ablation trial. After determining which features contribute most to shifting, we discard these features from the dataset.

The dropping of features may lead to the loss of useful information. However, a feature that exhibits a lot of shifts between training and test but provides little predictive power should be dropped.

Adversarial search refers to a “game-playing” technique between various agents in a competitive environment. It tasks the agents with conflicting objectives. As a result, these agents compete against each other to win the game.

In this context, an adversarial model is used, where the learning algorithm tries to build a predictor resilient to the deletion of features during testing. The goal of adversarial search is to find the best minimax approach.

This is done with an adversary that deletes features to find the best strategy. As is the nature of adversarial search, we note that one model attempts to maximize its score while the other one opposes it.

Weighting up involves increasing the weight associated with an example. To understand up-weighting, let’s give a basic example. Let’s say we have the following items: A, B, C, and D. As they are, their coefficients are also the same. We can assume they have equal importance.

Dataset shift deteriorates the performance of a model. No engineer wants to build an excellent model that ends up underperforming because of drift. When dealing with data that has a high chance of experiencing drift, it’s important to expect it, and correct it if it manifests. We have shed some light on the types of shift and the methods of correction. I hope they are of use to you. Good luck!