Joseph Odhiambo is pursuing a Degree in Mechanical Engineering at University of Nairobi. He is passionate about training and becoming a skilled Software Developer. He is also interested in Blockchain Technology and Health Informatics. When he is not coding, he loves hiking and exercising.

These coefficients are functions of scale and position. This process can be performed for both simple and discontinuous signals. A discontinuous wavelet is a sine wave followed by a medium sine wave. A simple signal is a slow sine wave.

This tutorial will look at the background theory of the wavelet and CWT. We will also look at the CWT and the various application of this transform. Finally, we discuss the Python code for computing the CWT of simple and discontinuous signals.

Theory of CWT: A wavelet

A wavelet is a waveform of effectively limited duration with an average zero value. It is defined as:

Here, a and b are called dilation and translation parameters, respectively. Below is a sample wavelet equation and its corresponding wavelet. 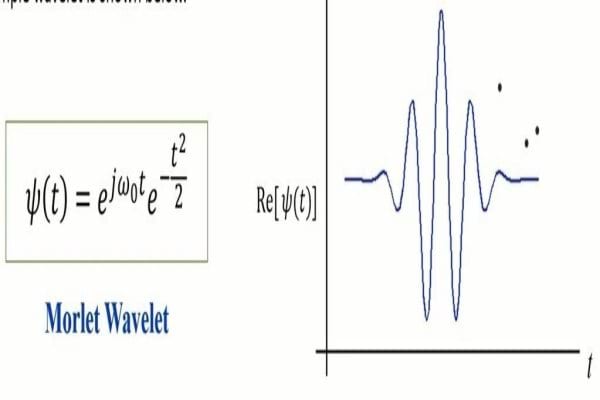 The plot is the magnitude plot.

The CWT of a signal f(t) is given by the equation below:

The results of the CWT are many wavelet coefficients that are a function of a and b. For different shapes of the wavelet, we compute the coefficients and plot them on the magnitude axis as shown below: 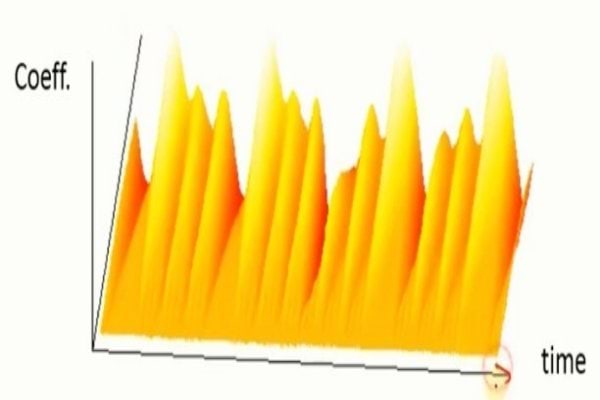 Starting from the origin on the scale axis is the lower scale, and along the axis is the higher scale. At lower scales, the wavelet is compressed, and the frequency here is high.

At higher scales, it is stretched, and the frequency here is low. This arrangement of coefficients is known as a scalogram. Below is the actual plot of the scalogram, which is complete for some signals with wavelets. 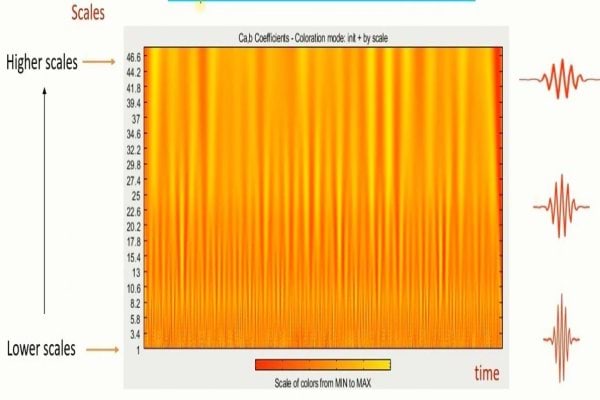 Application of the CWT

Sample scalogram for different signals are shown below: 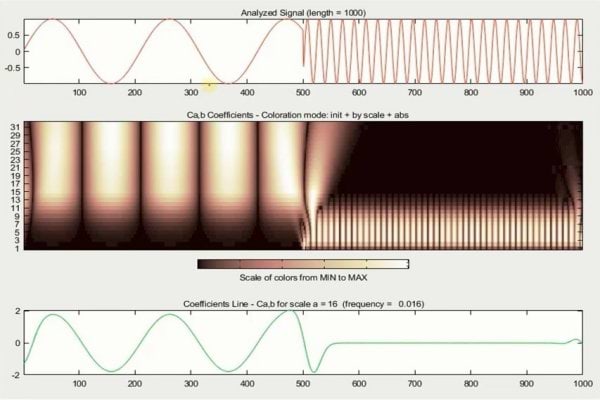 In the signal, there is a frequency break. This clear difference can be seen in a scalogram. Also, it shows at what point the frequency changed. 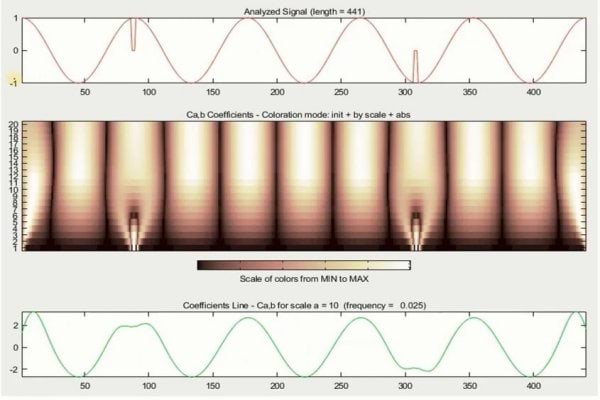 Here, we have a discontinuous signal. Also, we can see where the discontinuity occurred at a certain moment in time.

We use the pywavelet library to compute the CWT using Python.Pywavelet is an open-source wavelet transform software for Python. It combines a simple and high-level interface with low-level C and Python performance. Moreover, it comes with the Anaconda distribution. Therefore, we do not need to install it separately when using Anaconda.

Its dependencies are; numpy, SciPy, and Matplotlib (all these libraries come with Anaconda distribution).

The general syntax to compute the CWT is:

There are some other optional parameters. It means you do not have to define them.

The supported wavelets and their corresponding syntax to use in Python are as such:

We begin by first importing some libraries. These libraries are shown below:

Pywt is used to compute the CWT, numpy for the numerical calculations, and matplotlib is for plotting the output. We then define the time-space, signal, and scale to be used.

The time-space ranges from 0 to 1. The linspace() function separates the axis equal to 200 points. The number of scales used here is 31.

Now, we use the pywt.cwt() function to compute the CWT as shown below:

Let us plot the CWT coefficient in the form of a scalogram.

Here, we plot the scalogram by assuming the matrix is an image. This is why we use the imshow() function. The abs() function gives the absolute value of the coefficient coefs.

Other parameters that we will use are interpolation. It is used to soften the plot. cmap gives the colormap. Yticks and xticks give the x and y axis, and plt.show() shows the output plot.

For visualization of our signal, we can also plot it using the commands below:

Let us now execute our program.

The scalogram plot is shown below: 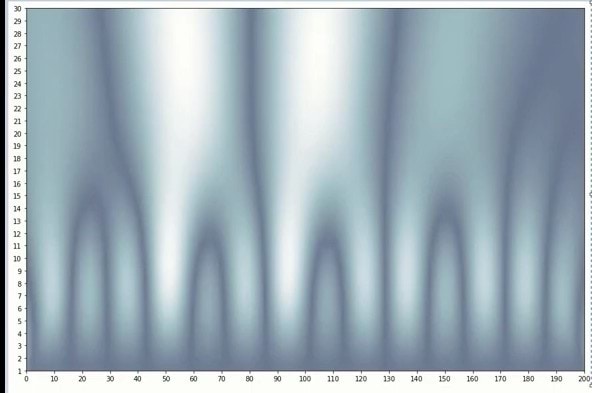 The corresponding signal is shown below: 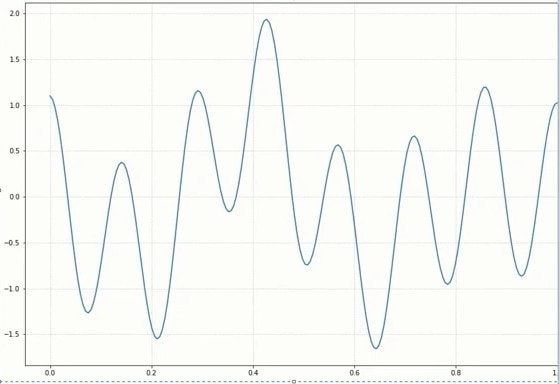 We first import the required libraries.

We then define our signal.

Here, our signal Fs sampling frequency is 44100, and the signal duration is 10ms. To get the number of samples, we get the product of samples per second Fs and the duration of the signal tclip.

If the product is not an integer, the function int() rounds it to the nearest integer. We also define the time points tpoints and the signal x. Finally, we have a cosine signal defined by the cos() function.

Let us introduce discontinuity to our signal. This is done by forcing the signal to be 0 at a given point as shown below:

We are forcing the signal to go to zero at the defined points. We then use the same function pywt.cwt() to compute the CWT for this signal and the similar commands to plot the scalogram as shown below:

We will have the plot for the signal and the corresponding scalogram plot when we execute this program.

For example, the signal is shown below: 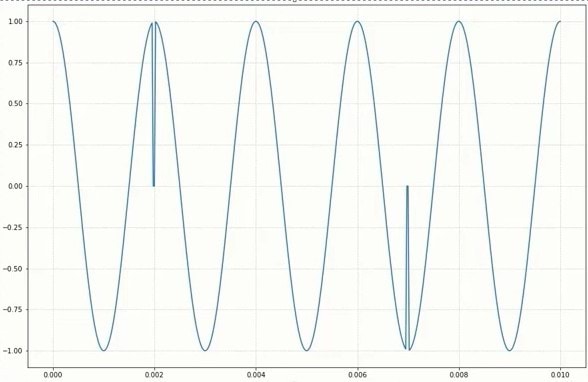 As we can see, the signal has a discontinuity at 2ms and 7ms, respectively. The corresponding scalogram is shown below: 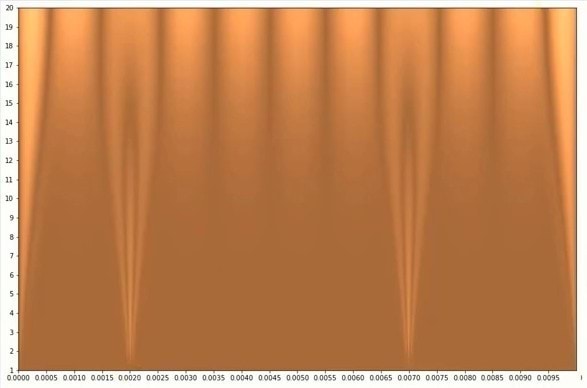 If you look at the scalogram, we can see at what point was the breakpoints. So it shows the strength of CWT in the analysis of the signal.

Performing the CWT is a very important process for analyzing various signals. This process is widely used in the various fields we discussed before. The scalogram view of the signal gives detailed visual information about the signal. It means by just looking at the scalogram, you can see the behavior of the signal.