Most of the software development workflow includes running, testing, building, and deploying the project manually. Each time we have any changes or updates we push the code to our version control system and deploy it manually. In any development phase, it can be highly inefficient to fix bugs and update new features manually as it consumes a lot of time and effort.

The solution to this is to automate the entire deployment process. This can be done by applying CI/CD to a project. Here, we are going to do that using Vue, Firebase Hosting, and GitHub workflows.

The overall process automates the software development and management process and makes it easy to test and deploy the final results. The main objective is to automatically build and deploy the updates to the main server after each pull request or change has been merged to the master branch of our GitHub repository.

What will happen as a result:

The first step is to get our Vue project ready. For the Vue boilerplate project, we are going to make use of Vue CLI. First, we need to install the latest version of Vue CLI globally in our system.

It allows us to download the starter Vue template based on various configurations. The required packages are pre-installed. It also enables us to manage the Vue project.

To install it, we need to run the following command in our system terminal:

After Vue CLI has been installed, we can now start a new Vue Project. For that, we need to run the following command in the directory where we want to download the project:

The required features are marked as shown in the screenshot below: 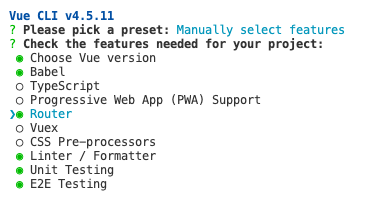 All of the features are unnecessary for this tutorial but for an actual Vue project, the selected features may be a prerequisite. We have also selected the Unit testing and E2E testing which can be also automated using the GitHub workflow actions.

After the selection is done, we can hit ‘Enter’ to go on to the next process which is shown in the screenshot below:

Here, we have selected the other additional requirements such as Vue version 3, enable history mode for the router, Prettier as code formatting, Jest for unit testing, and Cypress for E2E testing, etc. All the configurations will be saved to their default config files.

After the successful installation of the project, we need to go to the project directory using the following command:

Next, we need to execute the following command to run the project in the localhost:

We will get the following result in the browser: 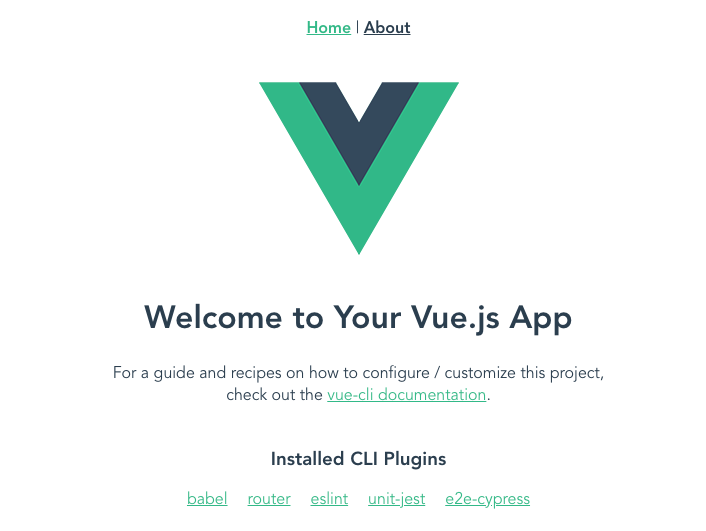 Now, we are going to upload our code to GitHub using Git. GitHub is an online cloud platform that stores the accurate versions of our coding project after each upload. It is a project management system designed to facilitate version control for Git.

Git is a version control tool used to provide a proper version to our coding project after each push or upload. Another major feature it provides is GitHub actions that will be used to automate the workflow. It helps ease up the build and deployment process.

Next, we need to login into a GitHub account and create a repository as directed in the screenshot below:

After mentioning the repository name, we can simply hit the ‘Create repository’ to create a repo. Now, this repository is where we can push our Vue project.

Here, we are going to make use of Git commands to push the project files. In the root project folder, we need to open the terminal or Git Bash and execute the following commands given order:

This will push our project to the master branch of our GitHub repository ‘vue_cicd_example’.

After the successful update, you can check your GitHub repo where you will find the project files just as in your vue project folder

But first, we need to create a Firebase project in order to link firebase to our Vue project.

To create a Firebase project, we need to log in to the Firebase and navigate to the firebase console. There we can simply click on ‘Add a project’ to get our project started. 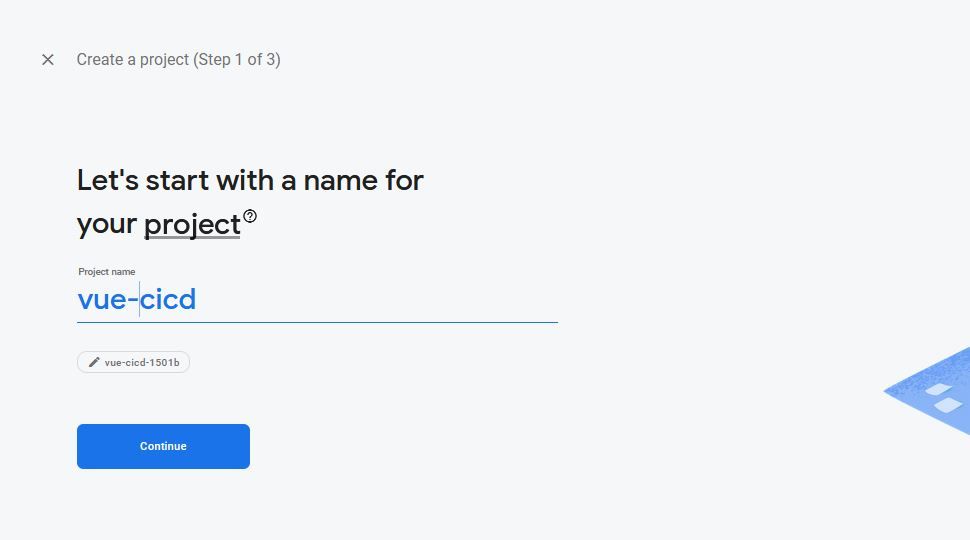 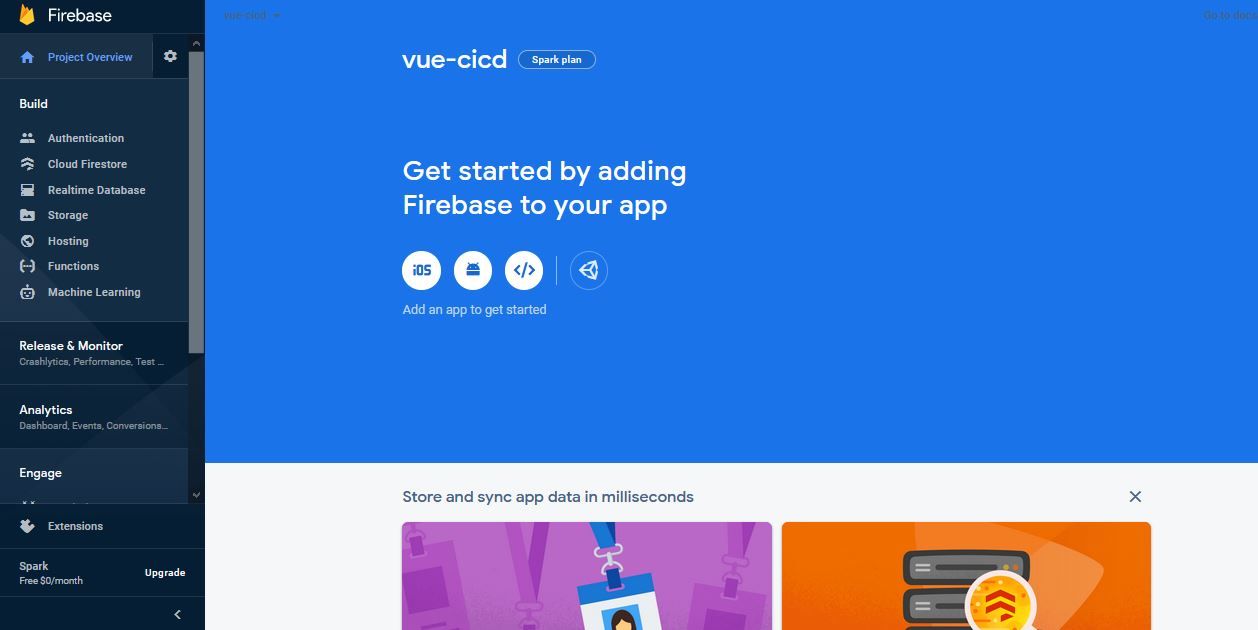 Now our Firebase project setup is complete. We can now configure the Firebase hosting in our Vue project.

Now that we have our repo in GitHub and the Firebase project, let’s initialize Firebase hosting for the project.

For this, we need to have Firebase CLI installed on our local machine. We need to globally install the firebase-tools package by executing the following command in our terminal:

Note that: We need to install the latest version of firebase-tools to get the configurations to connect with the GitHub project repo automatically through the firebase commands.

Now, we need to make sure that we are in the root project folder, and then execute the following command:

This command will provide us the configurations to initialize the Firebase project in our Vue project directory:

First, it will ask us for the Firebase CLI feature that we want to set up in our project folder as shown in the screenshot below:

Since we are going to link the Firebase hosting, we at least need to select the hosting feature.

Since we already have a Firebase project vue-cicd created in the earlier steps, we need select that one.

After the Firebase project has been selected, we will be asked to configure the hosting setups. The configurations that we need to apply is demonstrated in the screenshot below:

Here, we have selected our public directory as ‘dist’, which will contain the Hosting assets to be uploaded during firebase deployment.

Then, we are going to configure our project as a single-page app that will link all our coding files to index.html.

Here, the last configuration question asking us to ‘Set up automatic builds and deploys with GitHub?' is the most important one. We need to make sure to give ‘Yes’ as an answer for this. This will connect our Firebase Hosting setup to GitHub and automate the builds and deployments.

At this stage, it will connect to our GitHub to get the repository information after a simple authorization process that will open up in the browser.

After the successful authorization, we will be linked with our GitHub account so we can connect our repositories to our Firebase hosting.

Then, we will select the existing repositories in our GitHub account so that we can set up the GitHub workflow as shown in the screenshot below:

Then, we will be asked if we would like to run the build script before every deploy to which we need to put ‘Yes’ as an answer.

The script to run and commands are automatically given for the next configuration, so we simply need to press the ‘Enter’ button. The configuration screenshot is provided below:

This will create a workflow file called firebase-hosting-pull-request.yml in our project directory inside the .github/workflows folder.

Then, the additional configuration steps to automate the deployment to our site and which GitHub branch to deploy is shown in the screenshot below:

Here, we will choose to automate the deployment to our site in real-time when each pull-request to the master branch in our GitHub repo is merged.

This will create a workflow file called firebase-hosting-merge.yml in our project directory inside the .github/workflows folder.

As a result, the workflow folder and files will be created as shown in the screenshot below:

The major objective of these two workflows was to build the application and deploy it to Firebase Hosting automatically.

The first workflow file firebase-hosting-merge.yml will execute in every merge to the master branch. It will deploy the merge to our production or live website environment.

The second workflow file firebase-hosting-pull-request.yml will only execute when a pull-request is created from any arbitrary branch to the master branch. It will deploy the push to a separate URL which will enable us to test out the result before executing the merge to the pull request.

Now, with these two workflow scripts running, we won’t have to deal with deployment every time we make changes to the code and push to the GitHub repo.

We only need to push and merge the changes to the master branch. The rest of the build and deployment process will be automatically taken care of by Firebase and GitHub will automatically execute the deployment.

Now that we have everything set up, let’s test it out. Since we have two workflow files already in our Vue project directory, we already have some changes to push.

Now, we need to create a new Git branch in the root project and push the branch to the GitHub repo.

Now from the GitHub console, we can navigate to that branch and create a pull request in GitHub from the created branch to the master branch, that will automatically trigger the workflow with Github actions as shown in the screenshots below:

This proves that our configuration is working properly. Now after accepting the pull-request and merging the branch, the master branch will automatically trigger deployment as well.

We can check the successful deployment action from the GitHub repo actions.

The changes will be deployed live in the hosted website demo here.

The overall objective of the article was to help us get familiar with CI/CD with Vue.js project, Firebase, and GitHub actions workflows. This tutorial article delivered the detailed (step-by-step) concepts of how to configure the CI/CD process. The major step revolved around the configuration of Firebase Hosting with GitHub workflows.

The steps are simple and easy to understand and apply. All the manual work for iteratively building and deploying to the live server is simplified by this process.

The only work we have to do is to push our changes and merge the changes to the master branch. The rest of the operation is automatically handled by Firebase and GitHub action scripts.

There is so much more to GitHub actions workflows that we can explore. Remember that we also included the testing configurations in our setup of the Vue project at the beginning.

We can also trigger the automatic Unit and E2E testing using the workflow scripts while merging before the deployment. This will easily identify any errors or bugs in the changes automatically without having to do manual testing.

Hence, this is highly advantageous in the case of an overall software development cycle.

Worawat Kaewsanmuang is an Undergraduate Electrical Engineer student from Chiangmai University, Thailand. He is passionate about blockchain technology and mobile development.