The key ideas behind Capsule Networks (CapsNets) were introduced in 2011 by Geoffrey E. Hinton in a research paper called Transforming Autoencoders. Although, he did have a difficult time making the network work properly.

Understanding how Convolutional Neural Networks (CNNs) work is key to understanding Capsule Networks as it improves on CNNs. If you are not familiar with how CNN’s work, please feel free to read my previous article on the basics of CNNs.

In 2017, Geoffrey E. Hinton, alongside Sara Sabour and Nicholas Frosst, published a paper called Dynamic Routing Between Capsules. The three researchers built on the key ideas first published in 2011, and achieved state-of-the-art performance on the MNIST dataset, and demonstrated better results than Convolutional Neural Networks (CNNs) on highly overlapping digits. They also tested the capsule model on the CIFAR10 dataset, and it achieved a 10.6% error, which is not state-of-the-art, but it’s a good start.

Convolutional Neural Networks have been used in the Computer Vision domain for several years now. These networks have produced state-of-the-art results when solving image classification, image segmentation, and object detection tasks. Yet, these networks are not perfect. CNN’s tend to fail when they are fed with images that differ in orientation and sizes.

Let’s look at an example to understand what I mean. Suppose I take an original image of a dog and flip it upside down, as shown below. 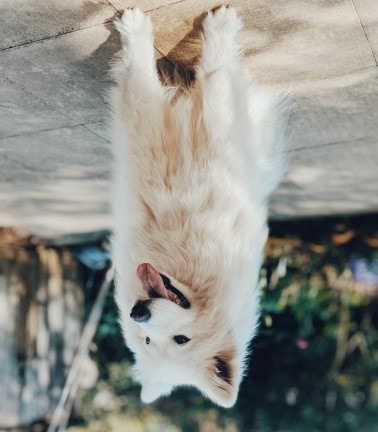 If we train the CNN on the original image and then feed in the dog’s flipped image as the new input to the CNN, it will fail to identify the dog’s features such as the eyes, nose, and mouth. This means that CNNs fail to learn the patterns of an image when its orientation is altered.

The pooling problem in CNNs

In CNN’s, we have the pooling operation. This operation’s function is meant to reduce input data dimensions from a high dimension to a low dimension.

This layer is applied to each convolution layer, and it takes the most active neurons and continues to pass them through the network. While at the same time the less active neurons are dropped, getting rid of important information that might tell us more about other critical spatial features in the network.

Geoffrey E. Hinton considers this a disaster. In one of his lectures, he is quoted saying:

“The pooling operation used in Convolution Neural Networks is a big mistake, and the fact that it works so well is a disaster.”

He says that computers can probably use this data that is being discarded to detect the relationship between the eyes and the nose and the distance between it.

So, how do we solve this problem?

This is where Capsule Networks (CapsNet) come into play.

What are Capsules in Capsule Networks (CapsNet)?

A capsule is a collection of neurons that learn to detect an object or parts of an object in an image. Its output is a vector whose length represents the existence of an entity being present in an image.

The vector’s length guides the network on which capsules to pick to forward to a higher capsule where more processing will be done. The vector orientation describes instantiation parameters such as the object’s rotation, size, or its exact location in an image.

A slight adjustment to the object’s rotation or its size, can change the vector’s orientation with proportion to its input, but its length will remain the same.

I hope that’s clear. Let’s go over what a CapsNet is.

What are Capsule Networks (CapsNet)?

A CapsNet consists of capsules instead of neurons in its architecture. Unlike neurons, that outputs scalars with no direction, capsules outputs vectors that have a direction. T

his feature in capsules helps solve the orientation problem in CNNs. When the image’s orientation is changed, the vector’s direction will also move following that position.

In computer graphics, computers render images on screens by taking into account the internal representations of an object, such as its scale, rotation, and position. On the other hand, the human brain process images the opposite way; this process is known as inverse graphics.

We first identify an object, deconstruct it into different parts, and establish a relationship between these parts of an object. This is how we humans identify objects.

A CapsNet aims to borrow this idea of inverse graphics, which is the reverse process of how computers (usually) render images. Here, the network starts with an image; it tries to determine the objects it contains and its instantiation parameters such as pose (relative position, orientation, and size).

This is unlike CNNs, which ignore the spatial relationships between features.

To obtain a representation of the instantiation parameters:

One key feature of Capsule Networks is preserving detailed information about an object’s location and its pose throughout the network. This process is known as equivariance.

In CNN’s, we have several pooling layers. Researchers have found that these pooling layers tend to lose information, such as the objects’ precise location and pose.

Capsule Networks are equivariant, making them suitable for applications such as object detection and image segmentation.

The algorithm computes a coupling coefficient ($$c_ij$$) to quantify the connection between the Primary Capsule and the DigitCaps layers. This coupling coefficient value is important as it facilitates the routing of capsules to the appropriate next layers, layers that only agree with its inputs.

However, this coefficient value is not permanent. It’s updated accordingly. Only three routing iterations is recommended to optimize the loss faster and to avoid the problem of overfitting. This is how the network continue to learn.

Instead of adding the squashing function to each layer as in CNNs, the function is applied to a nested set of layers in a CapsNet.

It’s important to note that the squashing function preserves the vectors’ orientation, but it squashes it to ensure its length is between 0 and 1.

The paper introduces a new squashing (non-linearity) function shown below, that works best with capsules:

The capsule network architecture contains an encoder and a decoder, with each component consisting of three layers.

The decoder network aims to reconstruct MNIST digits from the DigitCaps layer representation. It reconstructs the MNIST digits by minimizing the Euclidean distance between the input image and the decoder’s output.

This article briefly introduces the main key ideas behind Capsule Networks (CapsNet). CapsNet is a better approach than CNN, but it’s still at an infant stage. The researchers in the paper term CapsNet as being in a similar stage as Recurrent Neural Networks (RNN) at the start of this century.

More research still needs to be done before it can outperform current advanced technologies. I will be writing a follow-up article where I’ll go in-depth on implementing CapsNet using the Keras API and the TensorFlow back-end.

I hope you found this article helpful.