GitLab is a Git-based platform, similar to Github, that provides an array of tools and technologies for various aspects of the software development lifecycle (SDLC).

Another essential feature, which we will use in this tutorial, is its build-in continuous integration tool called Gitlab-ci.

In this tutorial, we are going to explore the basics of Gitlab and Gitlab-ci by building a CI/CD pipeline and running it using the UI provided by Gitlab.

Setting up a Gitlab account is very easy. Head over to this link, create an account, or choose to sign in with Google or GitHub. Once you sign in, it will redirect you to the homepage where you can explore various options such as creating a new project, a group or just explore some public repositories.

Follow these steps to set up a new project on Gitlab: 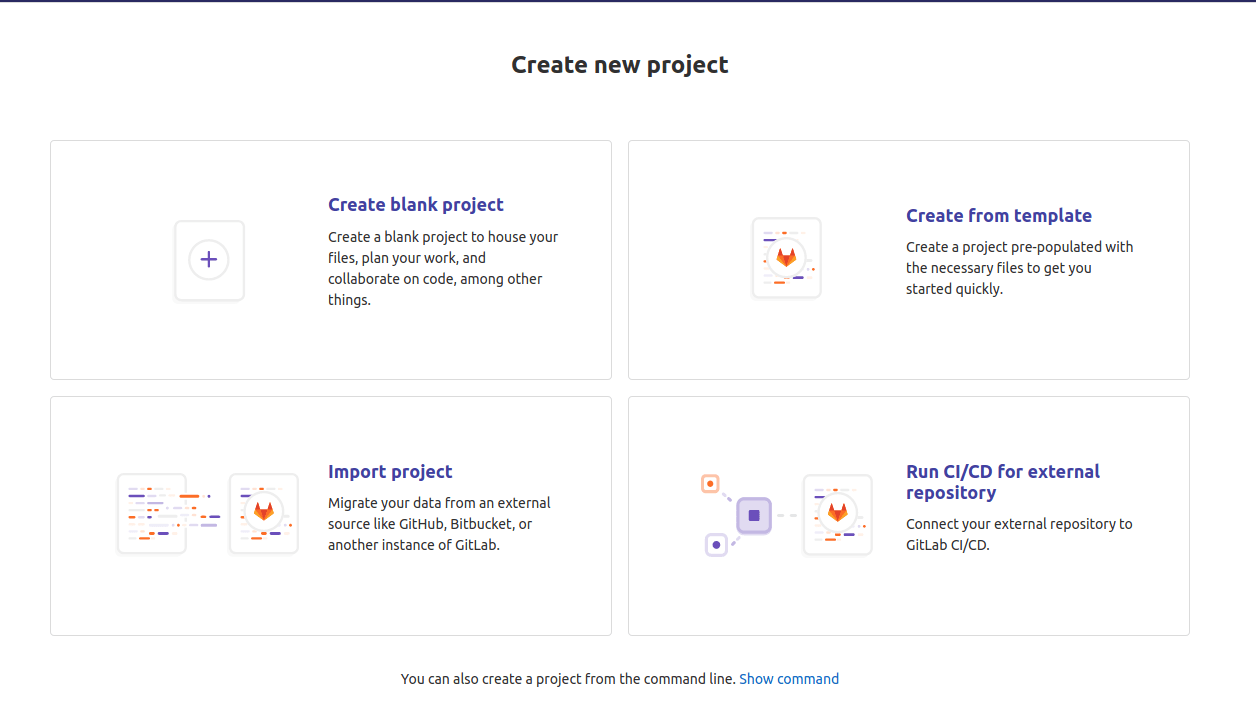 Now that you have the project on your local machine, we can start building our own CI/CD pipeline and deploy it on Gitlab using Gitlab-ci.

Continuous Integration can be defined as a process, in the software development lifecycle, where engineers and developers push code into a git-based repository. If developers do this frequently, an automated process, to verify and build the code, is included to save time and costs.

According to the official documentation, GitLab CI/CD is a powerful tool built into GitLab that allows you to apply all the continuous methods (Continuous Integration, Delivery, and Deployment) to your software with no third-party application or integration needed.

Users can configure GitLab CI/CD by creating a file called .gitlab-ci.yml in the root directory of the project. This file is written in a simple and easy to use language called YAML. This is a good article on YAML and its basics.

Once you define the .gitlab-ci.yml file, Gitlab creates a pipeline, that runs whenever there is a change to the code in the repository. These pipelines can have single or multiple stages that run one after the other(in series).

Each stage can consist of multiple jobs that are executed in parallel by the gitlab-runner, that is an application that works with GitLab to run jobs in a pipeline.

Let’s build a simple CI pipeline to run a Python script whenever we push changes to our repository.

Create a Python script called test.py in the repository and add the following lines of code into the file.

The script prints “hello world” and “testing” 5 times. This is just an example to help you understand how to create and run pipelines. You can run complex scripts and commands as well.

Create a file called .gitlab-ci.yml in the repository and add the following snippet of code. The variables section defines a list of variables that can be used in the pipeline.

I have declared a variable called example, whose value is set to “this is an example variable”. Variables are declared as key-value pairs (separated by a semicolon) in YAML.

The stages section defines a list of stages in the pipeline. These stages are executed one after the other, and hence, it’s important to order them based on dependencies. In other words, stages that are dependant on other stages must be declared after all of their dependencies.

The next lines define the actual stages that run in series. They start with the name of the stage followed by the tag stage, that defines which stage it is a part of. The script tag defines a shell script or command that is executed by the runner.

We can use the echo command to print something on the terminal and the cat command to display the contents of the Python script. We can also use echo to print the value of the variables that are defined in the file. These variables can be accessed by using the $ symbol.

Run the following commands to push the changes to the repository:

Navigate to the CI/CD section on the left navbar to view a list of pipelines. The latest one will be at the top and will have the “latest” tag. It will also show us whether the pipeline passed or failed. Click on “passed” or “failed” to view the stages of the pipeline and all the steps that were executed.

You will see the different stages that you defined and whether each stage passed or not. You can click on the individual stages to view the jobs executed in each stage in detail. 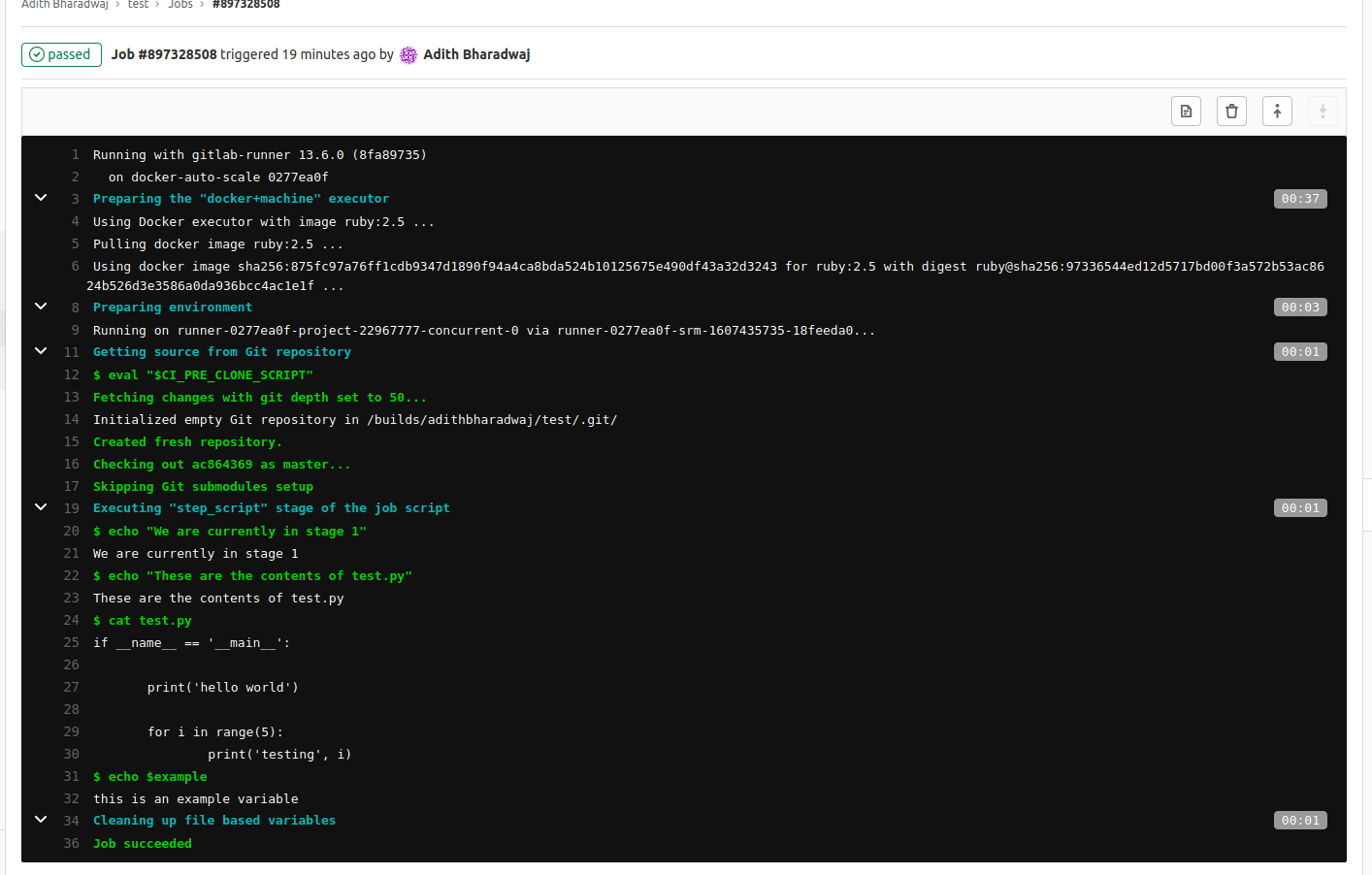 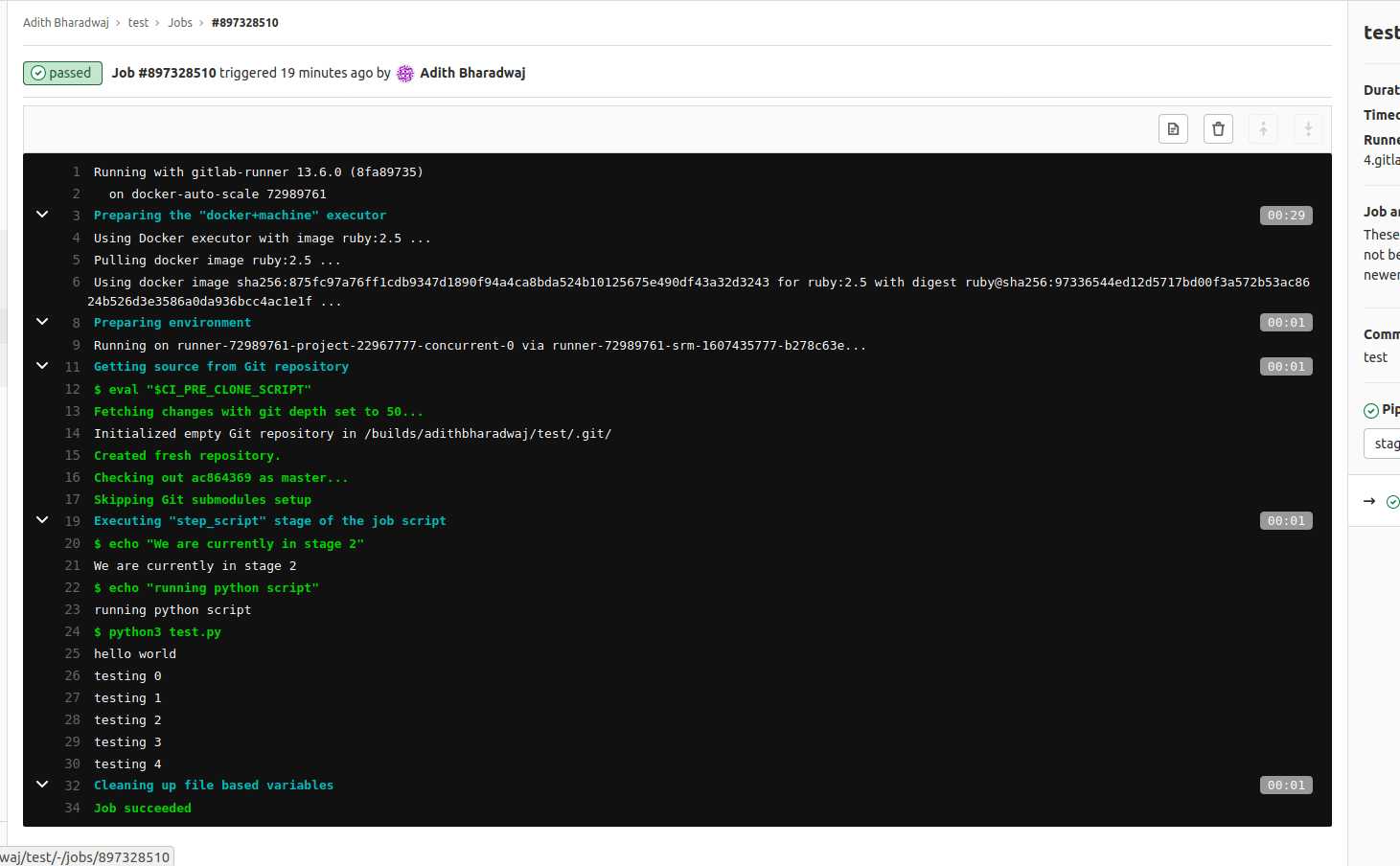 In conclusion, Gitlab-ci is an impeccable tool that makes the lives of software engineers easier by providing a robust solution without requiring any third-party library or tool.

In this tutorial, we understood the basics of GitLab and GitLab-ci by building a simple CI pipeline that automates the process of testing and building your code without the need for human intervention.

Now that you have grasped the basics, you can go ahead and build your own pipeline. Whether you are a software developer, a system administrator, or a DevOps engineer, GitLab-ci is an indispensable part of your toolkit.