Moses is an undergraduate IT student. Moses is a full-stack web developer. He also loves interacting with CMS, such as WordPress.

Hashing is converting an input of any length into a fixed-sized string of text using a mathematical function. This means that we can convert any text into an array of numbers and letters through an algorithm, no matter how long it is. The text being converted/hashed is referred to as an input. The algorithm used to covert this string is called a hash function.

The generated value is called a Hash value. A hashed text is also referred to as digest. Hashing converts the original information, i.e., plain text, to an alternative form where only the authorized parties can understand it.

This guide will walk the reader about the Hash functions and illustrates how to build a Hash generator application using React.js. We will create a simple app that calculates hashes from text strings, hash them, and sends back the hashed text to the user.

To follow along with this article, ensure you have the following basic requirements:

It’s a hash function that produces a 128-bit hash value. It accepts an input of any length, and it returns as output a fixed-length digest value used for authenticating the original messages. Digest size is always 128 bits, irrespective of the input. MD5 was designed as an improvement to a prior MD4 message-digest algorithm.

Secure Hash Algorithms, also known as SHA, are a family of cryptographic hash functions designed to keep secure data developed by the National Security Agency (NSA). It does so by converting the data into a hash. It uses a modular algorithm that accepts various bitwise operations and compression functions. There are different SHA family hash functions.

Characteristic of a Good Hash function

Although the process of hash function uses the hashing algorithms to generate the hash value, they are primarily used for comparison, not for encryption purposes. One thing to note is that hashed outputs are generated in a public fashion. So everything is public. There’s no secrecy.

Encryption is a particular type of encoding used to transfer private data. In encryption, the data to be encrypted is transformed using encryption algorithms like Rivest-Shamir-Adleman (RSA) using a cipher method. Thus, the encrypted data is also called the ciphertext.

Unlike the hash, ciphertext and be decoded and converted to the actual original input. Thus, ciphertext facilitates a private/secret sharing of data. In this case, the sender encoded the original data and sent it as ciphertext. The recipient will decode the sent ciphertext and convert it to plaintext to understand the shared message.

Hashed data is non-reversible. For example, when hashing is being used for logging system purposes. Once the user logins, the partial password is hashed using a hashing algorithm that checks against the database.

If the hash keys are the same, the user is given login permission, achieving integrity. These processes are all non-reversible. If you hash a word, a password, or file, you can’t take that hash value and then find out what the original input was.

For example, if you were to hash a single word and an entire book with a hash function, you would still get the same length of the different hash values.

We will use the create-react-app tool to set up a React app. It does the heavy lifting of configuring Webpack and Babel so that you can focus on the code to scale up the application.

First, create your desired project folder on your computer, then run the following command to bootstrap a React boilerplate application.

Give it a few minutes for the application to be fully set up once the process completes. Proceed to the created project folder using the following command:

Then, start the development server by running:

The above command will start the development server on port 3000. A default page will also be loaded from your default browser that loads a simple React Hello world page.

As mentioned earlier, to convert the text that the user will input to an encoded text, we need to use a hashing algorithm.

We will start by setting up a form where the user will add some text. But, first, replace the boilerplate code in your src/App.js file with the below code block.

We show the form with a field for the user’s text input. The form is submitted when a user hits the Generate hashed button. Then edit src/App.css as such to give the form some styles.

After saving the changes, your page should have the following form. 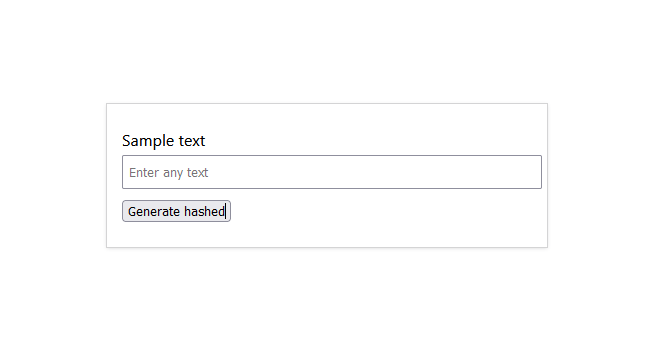 The next step will involve working on the onSubmit function to hash the text that the user is sending, store it in the state, and display it.

In the src/App.js file, import the Crypto module and set states for different hash functions, as shown below.

In the onSubmit function, set a key, hash the text using different algorithms and set each record to state.

Here we are using MD5, SHA512. SHA256 and SHA3. Feel free to change the hash function to any string you want to generate.

All the algorithms above use asymmetric encryption, meaning they do not use any key during hashing. In all cases, we are converting to string to view the output.

Add the following to the form inside the form-content div so that you can view the generated hashed values.

Add the following style in src/App.css to format the displayed hashed values.

Ensure that the development server is still running and refresh your browser’s tab. If the server is not running, start using npm run dev and open http://localhost:3000/ in your browser. Fill in a sample text and hit the Generate hash button. You should be able to view the hashed text as shown below. 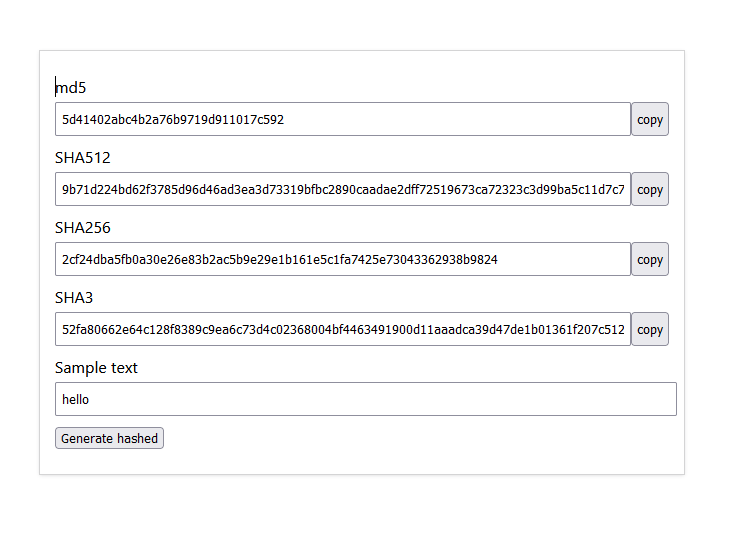 To be considered cryptographically secure, the hash functions should be impossible for an attacker to generate a message that matches a specific hash value. A slight change in the plaintext should trigger a drastic difference in the two digests.

This way, it is impossible for an attacker to create two messages that produce the same hash value. So there is no way to regenerate the plain text.

In this article we learned how to create a hashed text generator application based on the user’s input using React and the Crypto module.

To learn more about these algorithms and Crypto, check the following resources: