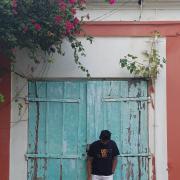 Boosting has quickly risen to be one of the most chosen techniques to improve the performance of models in machine learning. There has been an exponential rise in the usage of boosting algorithms in the world of Kaggle. One can hardly pick a model at the top 20 of any competition that hasn’t used a boosting algorithm.

The reader is encouraged to go through the following resources to gain a better understanding of this article:

The first-ever boosting algorithm was called AdaBoost (Adaptive Boosting) was introduced to the world by Freund and Schapire. Statisticians have come forward, laying proofs and theorems as to how this ensemble method works well in improving prediction results.

Ensemble methods are techniques that use multiple models and combine them into one for enhanced results. The term “models” could refer to any model - regression, support vector machines, and kNNs, and the model whose performance has to be improved is called the base model. Although the technique “boosting” uses decision trees to improve the model’s accuracy, it can be applied to any base model.

However, it has been observed that boosting a decision tree based model provides better results than boosting other models. One possible explanation could be the structural similarities of the base model (decision tree) and the boosting algorithm.

The article is split into two parts for easier understanding and for the information retention of the reader. This part focuses on refreshing the reader about boosting and explains two boosting algorithms in-depth - Adaptive Boosting (AdaBoost) and eXtreme Gradient Boosting (XGBoost).

To run the code, the user is expected to have the following libraries: NumPy, Pandas, Sklearn, and XGBoost.

The reader can install the mentioned libraries in their Windows-operated machine using the following command in the Command Prompt:

Let us import the libraries in Python.

As mentioned, boosting is confused with bagging. Those are two different terms, although both are ensemble methods.

Bagging and boosting both use an arbitrary N number of learners by generating additional data while training. These N learners are used to create M new training sets by sampling random sets from the original set.

Whereas in boosting, the M models are trained sequentially, with the models carrying forth the performance of the previous model in an attempt to rectify the errors in its previous model.

The performance of the models is analyzed by taking the weighted mean of the performances of the individual model, with weights being assigned by their performance.

The article uses the UCI Machine Learning Mushroom Dataset to implement the AdaBoost and XGBoost algorithms. For the set of features in the dataset, the task is to identify whether the type of mushroom is poisonous or edible. The reader is encouraged to download the dataset and follow along with the code blocks in the article to better understand.

Now, let’s import the dataset using the read_csv() method in Pandas and analyze the number of distinct categories in each feature. If a feature has only one unique value, we can drop it, as it has no significance while building the model.

As you can see Unique value count of veil-type is 1, the feature veil-type has only one distinct value in it and hence, can be dropped.

Let’s take a look at the data to see how it looks like.

Since machine learning models prefer numerical data, let’s convert the dataset to numbers by encoding it. LabelEncoder() is a method in the Scikit-Learn package that converts labels to numbers.

The reader is required to go through this resource on Label Encoding to understand why data has to be encoded.

Splitting the dataset into a target matrix Y and a feature matrix X,

The dataset must be be split into two - training and testing data. Let us go ahead and split the data, 70% of it for training and 30% for testing and standardize the values.

To understand why numerical data has to be standardized, the reader is advised to go through this article.

Being a weak learner, it combines the predictions from short tress (one-level trees) called decision stumps. AdaBoost was described as a “stagewise, additive modeling”, where “additive” didn’t mean a model fit added by covariates, but meant a linear combination of estimators.

These decision stump algorithms are used to identify weak learners. Starting with one decision tree, the misclassified examples are penalized by increasing their weight (the weight is boosted).

Another decision tree is built from the new and modified training data, which contain the weighted samples. New weak learners are added to the model sequentially to learn and identify tougher patterns.

The process is repeated for the number of iterations specified as a parameter. The algorithm makes predictions based on the weak learner’s majority vote coupled with their respective accuracies.

AdaBoost is resistant to overfitting as the number of iterations increase and are most effective when it works on a binary classification problem. AdaBoost includes an extra condition where a model is required to have an error of less than 50% to maintain it, otherwise, the iterations are repeated until a better learner is generated. 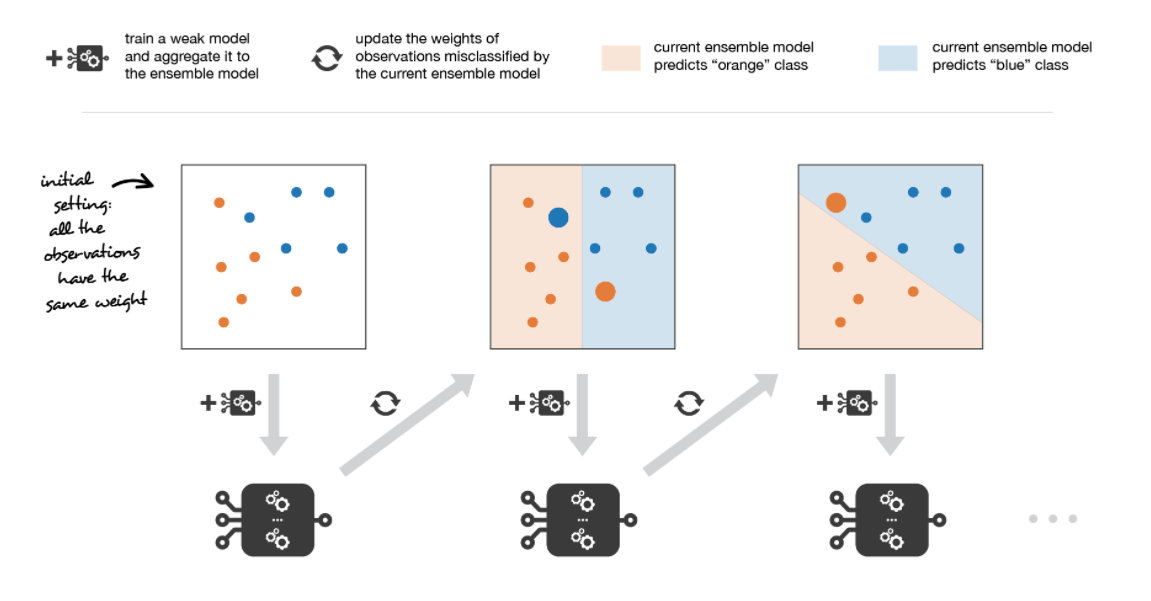 AdaBoost for Regression works on the same principle, with the only difference being the predictions are made using the weighted average of the decision tree, with the weight being the accuracy of the learner against the training data. AdaBoost includes randomization in the construction of the models, so each time a piece of code is run, a slightly different model is generated.

Stochastic learning algorithms produce different results every time the code is run, therefore, it is good practice to evaluate the performance of such algorithms by running the code a few times and taking the average of the results obtained.

The sklearn library in Python has an AdaBoostClassifier method which is used to classify the features as poisonous or edible.

The method has the following parameters:

Let us invoke an instance of the AdaBoostClassifier and fit it with the training data.

Ever since the world was introduced to the XGBoost algorithm through this paper, XGBoost has been considered the Mona Lisa of boosting algorithms, for the advantages it provides over its peers is undisputed.

Widely considered as one of the most important boosting methods, the algorithm has found its way to CERN, where statistical physicists have considered it to be the best approach to classify signals from the Large Hadron Collider. What makes it the most sought-after technique by Kagglers to win data science competitions?

Breaking the process of boosting down from a mathematical standpoint, boosting is used to help find the minima of the ’n’ features mapped in ’n’ dimensional space, and most algorithms use gradient descent to find the minima.

However, XGBoost uses a technique called the Newton-Raphson method, which provides a more direct route to the minima. Newton’s Method uses the second derivative of the function which provides curvature information.

This helps in the faster minimization of functions when compared to Gradient Descent, which uses the first derivative.

In XGBoost, the decision trees that have nodes with weights that are generated with less evidence are shrunk heavily. This clever method of eliminating nodes that aren’t significant is reflected in the speed of the algorithm and its memory consumption.

When enhancing the processing performance, the algorithm uses multiple cores in the CPU. Multiple decision trees are generated in parallel by the algorithm by utilizing all the cores in your CPU.

The system is designed as block-like structures, which enables the layout of the data to be reused in subsequent iterations instead of computing it all over again.

This is used to find split points in the tree where the data points have equal weights, which makes it difficult to handle. The algorithm uses a distributed weighted quantile sketch algorithm to handle weighted data.

The XGBoost library for Python is written in C++ and is available for C++, Python, R, Julia, Java, Hadoop and cloud-based platforms like AWS and Azure.

Unlike AdaBoost, XGBoost has a separate library for itself, which hopefully was installed at the beginning. Before importing the library and creating an instance of the XGBClassifier, let us take a look at some of the parameters required for invoking the XGBClassifier method.

The final result should be:

By experimenting with the parameters, one can achieve 100% accuracy with this dataset.

The article briefly covered two popular ensemble methods - bagging and boosting, explained their differences. AdaBoost and XGBoost algorithms were discussed from a technical standpoint, the methodology was briefly discussed and were coded.

Finally, the reader is expected not to limit their knowledge on boosting algorithms to this article and are encouraged to go through the additional resources to expand their horizons on the topic.