Vision is one of the key senses in humans. We rely on vision a lot, from recognizing physical objects to navigating in the real world. It’s a huge part of our lives.

The way humans see images isn’t the same way computers see them. Computers see images as an array of numbers. As it stores numbers in computers as 8-Bit integers, these allow a range of pixel values from 0 to 255 to be displayed. These values correspond to the pixel brightness in the image.

Let’s take an example of an image with the number 8 shown below:

A pixel value of 0 represents black (dull) while 255, white (bright). As seen in the image, the pixels surrounding the image are much brighter (closer to 255) than pixels away from it. This is how a computer sees an image.

What are Convolution Neural Networks (CNNs)?

The concept of Convolution Neural Networks (CNNs) results from a combination of deep neural networks and a set of operations known as convolutions.

CNN’s are a class of deep learning techniques popularly used to solve computer vision tasks. As they learn directly from input data, they are beneficial for finding patterns in images, enabling them to perform tasks such as face recognition, object detection, and scene recognition.

They are widely applied in solving computer vision and facial recognition tasks in smart cameras and self-driving cars.

Before we learn how CNNs work, it’s important to understand why we need CNNs and why they are better than other algorithms?

Let’s look at the architecture of a CNN.

The CNN architecture consists of a stacking of three building blocks:

A convolution layer is a key component of the CNN architecture. This layer helps us perform feature extractions on input data using the convolution operation. The convolution operation involves performing an element-wise multiplication between the filter’s weights and the patch of the input image with the same dimensions. Finally, the resulting output values are added together.

Let’s assume we want to compute the convolution of a 5 X 5 input image using a 3 X 3 filter: 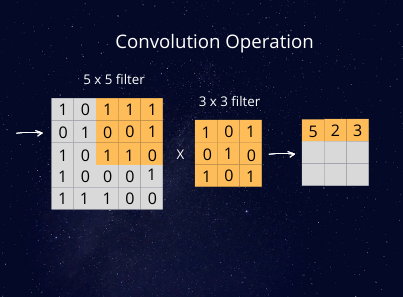 We slide the 3 X 3 filter over the input image, perform element-wise multiplication, and add the outputs.

Let’s touch a little bit on it.

From the image above, we note that it combines a convolution layer with the ReLU layer. The purpose of the ReLU activation function is to introduce non-linearity into the network.

Introducing non-linearity is important in deep learning because, in real life, almost all data is non-linear. ReLU returns a 0 value for all negative inputs, while for positive values, it returns that same value back (x).

Mathematically, this is defined by: 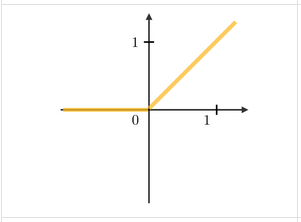 Why is ReLU widely used?

ReLU tends to have a much faster training time than other activation functions used in neural networks such as sigmoid and the hyperbolic tangent. Read more about them here.

A pooling layer is non-linear down-sampling that reduces the dimensionality of the feature maps of an input image, making its representation smaller and more manageable. This process reduces the number of parameters and computation resources in the network.

We will see an example of how the dimensionality reduction occurs from the max pooling and average pooling operations.

It’s important to note that a 2 x 2 filter size applied with a stride of 2 is the most used in CNN.

Max pooling is the most popular among the pooling operations. It extracts patches from the input feature maps, picks the largest value on each patch, and discards the rest.

Below is an example of a max-pooling operation. It comprises a filter size of 2 x 2 that extracts a 2 x 2 patch from the input tensor. It outputs the largest value in each patch. 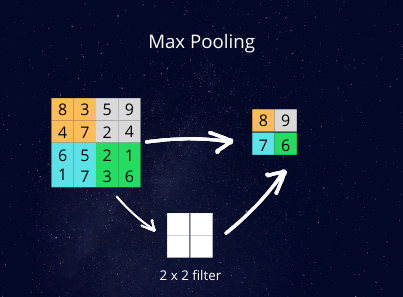 Max-pooling results in the input’s down-sampling, reducing its dimensions from a 4 x 4 to a 2 x 2.

Besides, average pooling is another type of pooling operation that’s worth mentioning. It performs down-sampling by performing an average of all values in a feature map. Thus, picking this averaged value as the new value of the feature space.

Here is an example of average pooling on CNN. 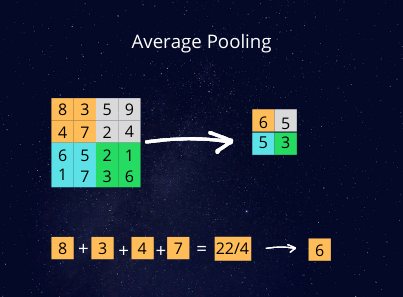 Here, the input image with a 4 x 4 dimension is reduced to a 2 x 2 using average pooling.

The Fully Connected (FC) layer is the last building block in a Convolution Neural Network. The output feature maps of the layer before the FC layer are transformed into a one-dimension (1D) array of numbers, i.e., flattened. That layer is connected to one or more fully connected layers.

The FC layer maps the extracted features from the convolution and pooling layers onto the final output, i.e., classification.

Last, once the CNN has derived an output using a probability function such as softmax, we compare this output with the output we want the network to give. The difference between the two gives us the error in our network.

The CNNs weights are then updated, and it minimizes the objective function through a process known as backpropagation, as we will see in the image below. We can describe backpropagation as the backward propagation of errors.

It’s fine-tuning the weights and bias so it can give us the output we want. It’s the core algorithm behind how neural networks learn. Learn more about it in this video.

It’s crucial to understand these terminologies that are commonly used in CNNs.

These are placeholders that change during training. Weights and Biases are the two main parameters in CNNs.

A kernel is an integral component of the structure of a CNN. It’s sometimes referred to as a filter. These are taught to the model during the training process. We perform the kernel operation on the first layer’s input image and the convolved images in the consecutive layers alongside convolution. This operation helps filter the information that’s of importance from the input image and discard the rest.

Stride refers to the number of pixels a convolution filter moves. It can be compared to a sliding window. The image below shows the stride, S moving with a pixel of 2.

Recently, CNN have been used for image captioning. Here, the goal is to generate a sentence that describes the semantic content in an image. It’s achieved by combining CNN with a Recurrent Neural Network(RNN). In the last layer in the CNN architecture, instead of a fully connected (FC) layer, it replaces the last layer of the CNN with an RNN.

I know you might find it difficult to understand how an RNN is getting fixed to a CNN. Let me explain using the structure of a CNN below.

What makes a CNN? It’s the feature learning portion in the above image.

The second portion, the classification bit, can be altered to suit the application that we so desire. For our use case, we need to introduce the RNN architecture to perform the tasks of captioning our images.

Why are we choosing an RNN in this case?

It’s because they are ideal for solving sequence prediction problems in text and speech data.

We use CNN to learn the hierarchical features in the input image. These learned features are encoded and passed into the RNN to generate sentences that describe the semantic content in the image.

Traditionally, CNNs have only been applied in solving Computer Vision problems. This has changed over the years. CNN’s are now being applied to solve NLP problems such as speech recognition and text classification.

The rapid development of speech recognition systems have been increasing over the years. This has been made possible by using word vectors, these are vectors of numbers representing words. They enable the research of the relationships between documents, words, and sentences.

For text classification, texts are first converted into vectors. It then passes these vectors as inputs to the CNN. In a forward propagating manner, these vectors pass through the convolution and pooling layer to extract features and reduce dimensions.

In radiology, CNN is used to classify whether the computed tomography (CT) scans of lung nodules are benign or malignant (cancerous).

In medical image analysis, CNN is used in the segmentation of organs. For example, it has been used to segment cancerous tumors in the uterus, as shown below.

A CNN that uses a pretty standard architecture is used to identify genetic disorders from facial phenotypes’ on pictures of children’s face. The identification is shown below.

We use CNN in self-driving cars to map raw pixel values from the camera inputs to various steering commands. Using CNN, these cars detect traffic signs, pedestrians, and other cars, enabling them to predict control signals.

The companies implementing CNNs into their self-driving cars include Tesla and Waymo to name a couple.

This article only scratches the surface on CNN’s basics that one needs to know before diving deeper into the field.

You can learn more advanced concepts of CNN here.