What are Architectural Patterns in Android?

Even though these applications differ in aspects such as what they do, how they work, how it is built, etc.., few things remain the same – a couple of them are: unique architecture and the User Interface. These elements can serve as a key component to the overall application creation process.

Having a better and unique UI can make a huge difference in how great an application is. The UI is solely not based on the developers’ imagination, but also on the consumer who may be using it. The interface must be user-friendly so that it will be easier for the user to grasp the visual changes taking place in the application while using it.

A typical native android application (applications that are only compatible with Android OS) will run only on mobile devices. Compared to desktops and laptops, mobile phones are smaller in size. So not all the content of the android app can be viewed on a single small screen.

Different parts of the app are equipped in different fragments - a reusable Android component that holds a portion of the app’s user interface. It can manage its own incoming user requests and must be accessed via the activity that hosts it.

Fragments are several screens contained within a single activity. The app may need certain specific commands which will access these parts when the user wishes to access them. When they are accessed, the whole app has to update its interface with the new data.

Hence, Android architecture patterns are implemented to modify these crucial parts of the code. This article deals with such architectural patterns which can be implemented to improve the overall project design. There are many benefits for an application by adding design patterns.

It makes the whole source code cleaner and easier to maintain and manage. It simplifies complex code since many functions will be nested in different classes. It also helps in covering all unit tests - a testing method in which single units of the application’s source code is tested to ensure that it works as intended without any errors.

It is carried out during the developmental phase of the application. This article will briefly discuss the three most popular patterns: MVC, MVP, and MVVM.

Let us take a look at these three types one by one.

MVC pattern was first developed in 1970. As the name describes itself, this pattern has three components - Model, View, and Controller. The Model holds the main logic and rules for how the data is changed and manipulated. View and Controller both depend on the Model. View refers to the UI layer. It allows you to see the data that is stored in the model.

The Controller acts as a request handler. It handles all the incoming requests from the user and updates the model to show what kind of data the user wants to see. The view displays it on the screen. If the view follows the single responsibility principle then its main role is to display the data from the model for every user event handled by the controller.

Here, the developers can work on different parts of the pattern separately. As a result, work can be done much more quickly. This also aids in the coordination and completion of work by multiple developers. Since the parts are separated, the code can be reused in some other application.

However, since they all rely on each other, if one of the components fail, it may pose a problem for the whole application. Furthermore, part separability may create a problem of extreme maintenance and regulations. This pattern may not be appropriate for small real-world problems, and implementing it in our application may require an additional concept comprehension of problem definition.

Here the controller part is replaced by the presenter. The Presenter is responsible for accepting all the incoming inputs/requests from the user. It then transfers them to the Model. The model accesses the data the user wants and sends it back as a result to the View. Hence, the key task of the presenter is to deal with all the UI events so that users can retrieve their data.

The role of model and view in MVP is the same as in MVC. One of the assisting factors to the application while using MVP is that the view is submissive. Its sole purpose is to approve all user activities and transfer the rest of the work to the presenter. Additionally, since all three parts are separated, debugging becomes simpler because unit testing can be done when other parts are still being developed.

The layers are divided here just as they are in MVC. As a result, understanding the code becomes easier and its maintenance becomes simpler. Similarly, the code can be reused in other applications as well. Another added advantage of the MVP pattern is that the components do not have any logical relationships.

However, if we look at it from another perspective, the pattern can suffer a disadvantage because the view would become passive to the model. In reality, applying this pattern would necessitate more experience and expertise. This means more time to put into development, deployment and unit testing.

In MVVM, the view is independent of the model. This means that the UI part is separated from the core logic of the application. It’s the job of the view model to retrieve the data from the model and present them in the view.

Also, the view model carries out the computational work of the view by handling the user events and updating the UI. This is because in MVVM the view is responsible for notifying the view-model about all the user action. As a result, we can assume that View and View-Model has a two-way data binding relationship.

In MVVM the code is broken down into smaller pieces and the main logic is separated from the UI part. Again, as a result, there’s a higher chance of code being reused. The program’s scalability improves at this stage. It becomes easier to replace or add any new code to the existing ones if possible. This pattern has an added advantage of security and improved efficiency as compared to others.

These desirable characteristics may come at a cost, in the form of a higher level of difficulty in designing this pattern. Because of the complexity of the code and the use of data bindings, debugging becomes difficult. Another disadvantage of this pattern is that if the application’s memory usage grows significantly it can give rise to technical errors.

Since the above architectural designs are based around the idea of collaborating with their own structure to achieve a positive outcome, each component has its own set of responsibilities. Model and View are shared by all of the patterns mentioned above. The third aspect is what distinguishes them from one another. As a result, here is a simplified mind map to help you visualize what each pattern represents. 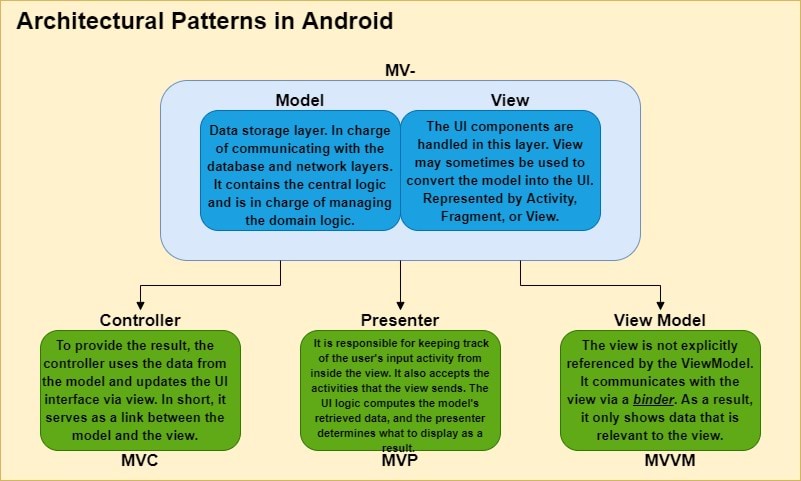 A quick table of comparison

This table will come in handy for you to recognize some fundamental points that will help you to differentiate between the MVC, MVP, and MVVM patterns.

In this article, we went through three architecture patterns that can be used while designing Android apps. While using design patterns in your apps is not mandatory, implementing them will definitely make the UI interface more user-friendly and will benefit in managing various functions and classes.

This contributes to giving the application a modular structure. Often, implementing patterns can be time-consuming because each component must be built first and then unit tested before being released completely into the source code. Although the developer team must be meticulous in their future supervision and management because a single flaw or bug in the pattern may be harmful to the coherence of the architecture.

Even so, one thing is certain: the code becomes less messy and more readable and it also performs efficiently in A/B testing. No one pattern is considered the best of the three; it essentially depends on the users’ demand, developers’ decision, and the needs of the application.