An Overview of Fuzzy Logic System

Decision-making is an integral aspect of our daily lives. It is hard to establish whether a certain statement (or state) is true or false in certain situations. In such situations, fuzzy logic can be used to offer flexibility in reasoning, given the uncertainty.

Fuzzy logic systems are used in automobile and domestic applications to control actions and processes. This article provides an overview of this logic and how it is implemented. It also highlights its real-life applications and explains why it is used.

What is fuzzy logic?

Fuzzy means uncertain, indefinite, vague, or unclear. Fuzzy logic is a computing technique that is based on the degree of truth. A fuzzy logic system uses the input’s degree of truth and linguistic variables to produce a certain output. The state of this input determines the nature of the output.

This technique is different from boolean logic, which uses only two categories (true or false). In boolean logic, two categories (0 and 1) are used to describe objects. For example, the temperature in water served in glass may be High (1) or Low (0). The water is described using more categories in fuzzy logic, but within the two categories mentioned earlier. In this case, the water may be very cold, very warm, or warm.

Let’s take another simple example. Suppose we have a question that we need to answer. In boolean logic, the answer would be either yes or no. In fuzzy logic, the answer may be between these two categories. Some of the probable answers in this logic may include possibly yes, possibly no, or certainly no.

We learn that fuzzy logic systems use degrees of possibilities rather than precise categories in the above two examples. These are used to generate an explicit output.

Why fuzzy logic is used 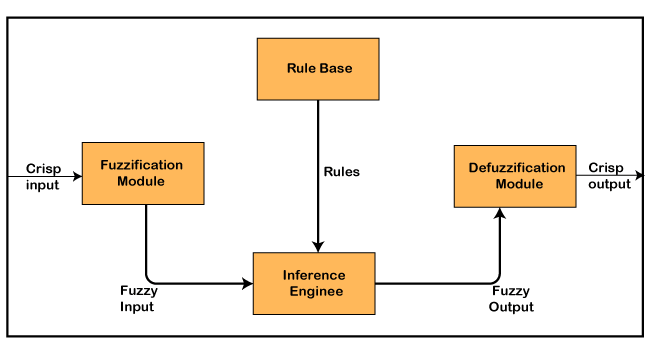 The fuzzy logic architecture consists of the following components:

In simple terms, the membership function is used to estimate or compute the degree of membership of a certain input element in a specific fuzzy set. The Universe is on the x-axis, while the degrees of membership are on the y-axis.

The following diagram shows an example of a membership function.

The fuzzy logic technique can be implemented in various systems (hardware and software). A simple, practical example of a fuzzy logic system can help us understand how fuzzy logic is implemented.

The following are the main algorithmic steps for fuzzy logic.

Step 1: We should first define the linguistic terms (or variables). In Boolean logic, the temperature can be categorized into two main categories: hot and cold.

Step 2: After defining the linguistic terms, we should create membership functions. This step involves providing a graphical representation of our fuzzy set (t). The input temperature is on the x-axis, while the degrees of membership are on the y-axis.

The membership function computes the degrees of membership of various temperature elements.

Step 3: In the third step, we will construct rules for controlling the air conditioner’s temperature. Here, we can apply the IF-THEN logic to set effective rules. For example, the following IF-THEN conditions can be made.

Step 4: After setting the system’s rules, the fuzzifier uses them to transform the raw input into fuzzy sets. This is done through fuzzy operations (e.g., Max and Min). These fuzzy sets are used to generate a membership function output.

Step 5: Defuzzification: This is the last algorithm step. In this step, the defuzzifier uses the membership function to establish the output temperature.

Car manufacturers also use this system to regulate fuel injection. This is done using input elements such as load capacity, engine RPM, and temperature.

Aircrafts use this technique to maintain a certain level of altitude. IF-THEN conditions are applied to ensure that the aircraft performs corrective measures if it is not within the desired altitude. For example, if the desired cruising altitude is 40,000 ft above the sea level, the fuzzy logic will enable the aircraft to return to this level if it goes above or below it.

The input elements include the size of clothes, type of dirt, and dirt level (degree). If the clothes are large and greasy, the washing machine will allow a large amount of water from the tap. The machine will take a long time to wash these clothes because of the large size of the clothes and the nature of the dirt.

Fuzzy logic is an effective tool for solving various computing problems in the world. This technique has been applied in different machines and applications to control actions based on certain pre-defined conditions. In the future, fuzzy logic will be applied to diverse products and systems. The scope of fuzzy logic applications will increase due to technological advancement and digital transformation.