The Section Guide to Varnish Cache

What is Varnish Cache

Varnish Cache is a reverse proxy for caching HTTP, also sometimes known as an HTTP accelerator. It is most often used to cache content in front of the web server - anything from static images and CSS files to full HTML documents can be cached by Varnish Cache. The key advantages of Varnish Cache are it’s speed and flexibility: It can speed up delivery of content by 300 - 1000x, and because of the flexibility of its domain specific language, Varnish Cache Configuration Language (VCL), it can be configured to act as a load balancer, block IP addresses, and more. It is this combination of speed and configurability that has helped Varnish Cache grow in popularity over older caching reverse proxies like Nginx and Squid.

Where the Varnish Cache Server Sits

Varnish Cache is deployed as a reverse proxy, a piece of software that sits in front of a web server and intercepts requests made to that server, therefore acting as a proxy to the server a visitor is trying to access. The reverse part comes in because a reverse proxy acts as the server itself, whereas a forward proxy acts on the client or user side to, for example, block access to certain sites within a company network.

Reverse proxies have a huge range of uses: They can examine traffic for threats, block bots, and serve cached content directly without traffic needing to go back to the origin server. The Varnish Cache reverse proxy can be configured to do many things but for this paper we are focusing on its main use, caching content. Varnish Cache sits in front of the origin server and any database servers and caches or stores copies of requests which can then be delivered back to visitors extremely quickly.

The amount of content that is served from Varnish Cache depends on how you have configured your Varnish Cache instance (ie if you have set it to only cache images) in addition to how “warm” the cache is. When you first cache content and every time the set cache time expires the cache will be “cold” and the next time a visitor comes to your website it will need to fetch content from the origin before delivering it to that visitor. Varnish Cache fetches the content and, if is is cacheable, will then store it for the next visitor who can be served directly from cache.

Content that is labelled as uncachable will never be stored in Varnish Cache and will always be fetched from the origin. Content might be labelled as uncachable if it has a max-age set at 0, if it has cookies attached, or because you don’t want it to be cached. By using VCL you can override headers set at your server that say content should not be cached, and even cache pages around content that is personalized. This means you should in theory be able to cache the majority of your requests and achieve a fast webpage for nearly all visitors. The next sections on VCL go more into detail on how to do this.

One hurdle of Varnish Cache is that it is designed to accelerate HTTP, not the secure HTTPS. As more and more websites are moving all of their pages to HTTPS for better protection against attacks, this has become something many Varnish Cache users have to work around. To enforce HTTPS with Varnish Cache you will need to put an SSL/TLS terminator in front of Varnish Cache to convert HTTPS to HTTP.

One way to do this is by using Nginx as the SSL/TLS terminator. Nginx is another reverse proxy that is sometimes used to cache content, but Varnish Cache is much faster. Because Nginx allows for HTTPS traffic, you can install Nginx in front of Varnish Cache to perform the HTTPS to HTTP conversion. You should also install Nginx behind Varnish Cache to fetch content from your origin over HTTPS.

In the above graph, the TLS/SSL terminator (such as Nginx) is sitting both in front of Varnish Cache to intercept HTTPS traffic before it gets to Varnish Cache, and behind Varnish Cache so that requests are converted back to HTTPS before going to your origin. As shown by steps 7 and 8, if Varnish Cache already has an item or full page in its cache it will serve the content directly through the first Nginx instance and will not need to request via HTTPS back to the origin.

For detailed instruction on setting up Varnish Cache with HTTPS read this Digital Ocean tutorial. If you are deploying Varnish Cache via a paid service or content delivery solution they may be able to handle this for you: Section provides free SSL/TLS certificates for users and handles the SSL/TLS termination so users do not need to configure it separately.

Varnish is powerful because it is so fast, but even more importantly because it has such a wide range of abilities. Many caching proxies only focus on caching static items like images and CSS files, but due to its flexibility Varnish Cache can cache static items, the HTML document, and even pages that have personalized elements. When caching first came along in the 1990s it was usually tied to CDNs. CDNs focused on caching images and other content that is the same for all users, often on a separate URL from other content - for example, all images might be fetched from cdn.yoursite.com.

While caching static content solved the challenges of websites in the 1990s - namely that both end-users and the data centers content was served from had much lower bandwidth than those of today - now with huge server farms and fast connections on both sides, to win the speed game you need to do more than caching static items.

Caching a range of content is where Varnish Cache’s flexibility really shines: With Varnish Cache you can cache what is sometimes called “dynamic content” but usually refers to the HTML document, and cache content around personalized elements using a “hole punching” technique. Example of content that can be cached with Varnish Cache include: 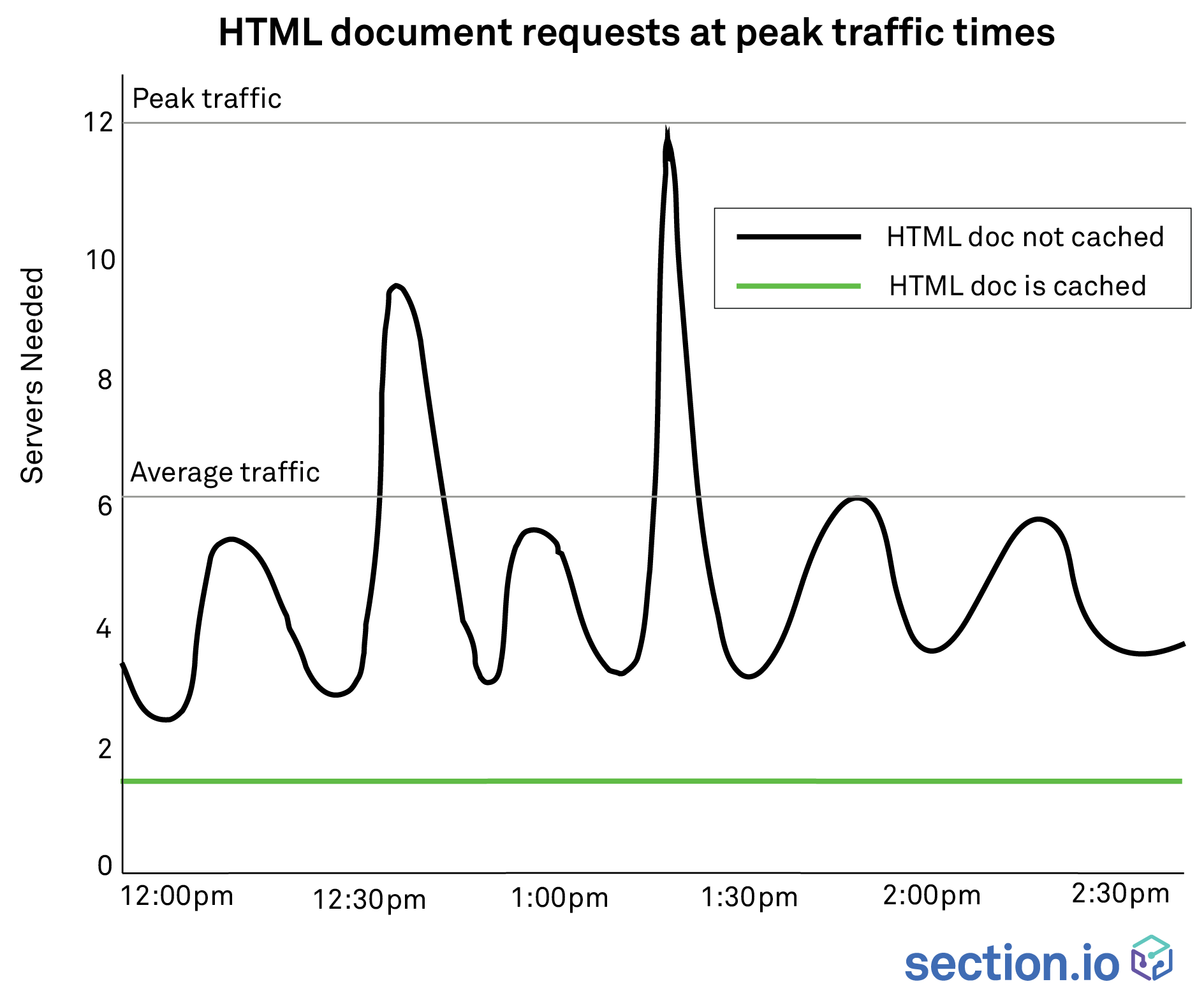 Varnish also allows for caching the HTML document even when it includes personalized elements such as cart size and account information. Using Varnish Cache Configuration Language and a technique called “hole punching” websites can configure their pages so that a majority of the content can be served from cache. In the next section we go into VCL and how to use it to cache all types of content.

The reason Varnish Cache is so flexible is due to Varnish Cache Configuration Language (VCL), the domain specific language for Varnish Cache. VCL controls how Varnish Cache handles HTTP requests, and can be thought of as a programming language for HTTP just as PHP is used for server side scripting. Understanding how VCL works is vital to getting a good outcome out of Varnish Cache, but this can be a challenge as most developers will not be familiar with VCL until they start working with Varnish Cache. To understand VCL you must have a grasp of what each VCL subroutine achieves as well as how the built-in VCL file interacts with the default VCL.

Varnish Cache gives users two files on installation: default.vcl and builtin.vcl. The default file is blank and only contains comments. This is the file that you will edit to write VCL specific to your web application. The built-in VCL file gets triggered if you have not overridden each routine in the default VCL.

If the default VCL is not edited, Varnish Cache will fall through to the the built-in VCL logic. The built-in VCL does have some instructions to cache objects, however because it’s default behavior is to not cache requests with cookies, and to not override headers set from the server, it often will not cache anything for modern web applications. Because of this, when getting started with Varnish Cache users must edit the default VCL to achieve a solid performance result for their application.

If you have been caching static content with a basic system like Amazon’s CloudFront you could actually see a performance decrease if you switch to Varnish Cache without configuring anything. Although Varnish Cache is a faster and more sophisticated tool which will ultimately provide much better performance results, it requires some configuring to cache content for most visitors.

For this reason, we highly recommend reading through the next sections and using other resources like Varnish Cache Software to get an understanding of what VCL will be needed for your application, rather than turning on Varnish Cache with only the built-in VCL. While the built-in VCL is safe in that it will not cache uncachable content, with an understanding of VCL and your application you will get a much better result than with the built-in configurations and any other caching solution.

To be able to configure Varnish Cache you will need to learn basic Varnish Cache syntax as well as what each subroutine achieves. It’s important to note that the built-in Varnish Cache is always running underneath the VCL you write: Unless you write VCL that terminates a state each request will fall back to the built-in code. For example, you would write VCL saying “if this request matches these parameters then try to retrieve it from the cache” and all requests that do not match those parameters would fall back to what is written in builtin.vcl.

The basic VCL request flow is illustrated below, where vcl_recv is the first subroutine that is executed after Varnish Cache has examined the basic information on the request such as verifying it is a valid HTTP request. The flow is divided into client side and back end requests, with all back end requests starting with vcl_backend. While the full Varnish Cache flow is more complex, this basic flow will get you started. It is important to understand the purpose of each subroutine in the below chart, however the ones you will likely alter to customize your Varnish Cache configuration are vcl_recv, vcl_hash, vcl_backend_response, and vcl_deliver.


Each of the above subroutines have different purposes and terminate with actions including VCL pass, VCL pipe, VCL Hash, and VCL deliver. To learn about how to write Varnish Cache Configuration Language to cache content for your application please download the full Varnish Cache Guide. If you have specific questions about Varnish Cache and VCL check out our community forum or contact us and one of our Varnish Cache experts would be happy to help you.