This customer story was produced jointly by SiteSpect and Section, in cooperation with Temple & Webster.

Temple & Webster is Australia’s leading online furniture and homewares retailer. The brand offers more than 150,000 products, the largest range of any online retailer in the category, so website testing and optimization plays a central role for the business.

Since 2018, Temple & Webster’s digital marketing, product, dev-ops and technology teams have worked with SiteSpect to optimize its online store, and they’ve seen substantial benefits. Calvin Brodie, Head of Product at Temple & Webster says, “For a company of our size, a 1% revenue increase is a 7-digit number, so every chance for optimization counts.” Conversion improvements have a big impact on the company’s bottom line.

With a long-standing investment in web optimization and testing, Temple & Webster have refined its approach and embraced optimization site-wide, especially by using Origin Experiments©, SiteSpect’s unique “in the flow” server-side approach, to refine and improve the functionality of its digital experiences beyond look and feel.

Temple & Webster had tested other optimization tools in the past, but felt that they fell short when it came to really moving the needle. Specifically, they found tools that focused primarily on client-side look and feel changes didn’t provide the level of sophistication that they required, and any server-side offerings fell short in complexity, workflow, or integration capability. Because of SiteSpect’s patented reverse proxy architecture, they were able to start experimenting at the origin without disrupting the existing code or impacting site performance. Regarding Origin Experiments©, Mike Henriques, CIO at Temple & Webster says, “You simply must be doing this. We haven’t seen a tool that has allowed us to do as much complex and statistically significant testing as we have been able to do with SiteSpect.”

Since implementing SiteSpect in 2018, Temple & Webster consistently has at least four Origin Experiments© running and four client-side experiments running at any given time. Henriques describes SiteSpect as, “complexity at our end, and simplicity on the SiteSpect side.” SiteSpect integrates completely with the Temple & Webster online presence, meaning the team can test anything and everything related to their site, whether it pertains to an internally built tool or a third-party service.

Temple & Webster have always provided a customer-focused, data-driven digital experience, and with a strong testing and optimization program, they can understand the impact of any change on any channel. Brodie mentions that, “the most valuable insights aren’t necessarily the obvious big wins or losses. Instead, the most valuable results are those that differ from our hypotheses, common wisdom or accepted UI or UX ‘best’ practices.”

While there are some great standards out there about what type of copy, font, or search algorithm work best, the actual results are incredibly site and context specific. As Bodie says, “when the data differs from expectations, that’s where you really make data-driven decisions.” He also noted that SiteSpect’s technology provides better data accuracy, more seamless integration and visibility across the entire customer journey compared to what they experience with tag-based vendor tools.

Testing Across the Company

With the measurable successes that Temple & Webster have seen with SiteSpect, and the “second to none” support, as Brodie and Henriques noted, testing and optimization has begun to spread throughout the organization. Temple & Webster merchandising and marketing teams have taken some of the A/B testing into their own hands, meaning that they can more efficiently validate and improve their work. Henriques says that SiteSpect is “enabling more of the business to be self-sufficient in testing some of its own hypotheses, which they couldn’t do before. And that’s a hugely positive driver of our culture of data-driven innovation.”

Integrating With Their Architecture

When Temple & Webster began exploring SiteSpect as a potential solution for its digital business, it first needed to assess whether SiteSpect would work within its architecture and technology stack. This evaluation was not only focused around analytics and other data tools, which offered no issues for SiteSpect, but also its network infrastructure, which included Section’s Edge Compute Platform.

It didn’t take long to realize that integrating SiteSpect with Section would be no problem. Due to its patented architecture, which is very similar to a Content Delivery Network (CDN), SiteSpect is able to develop routing rules that seamlessly integrate with any CDN and edge solutions like Section. During early discussions, Henriques mentioned that “it is apparent for us that SiteSpect would be best suited to sit within our Section layer.”

Recognizing the value for Temple & Webster, along with the opportunity for others to leverage a joint solution, the SiteSpect and Section teams worked together to create a new deployment option within Section, rather than routing outside of Section.

“This goes to show how flexible both SiteSpect’s and Section’s platforms are, and how great their DevOps and technical support teams are in order to accommodate our needs. Since migrating to this new deployment, the traffic routing and customer experience have been seamless, and the performance and stability have improved tremendously.” -Mike Henriques, CIO, Temple & Webster

Recently, Temple & Webster launched a page redesign for their mobile site. As part of the process, they tested all of their important metrics on the new experience. After that initial round of testing, they discovered that the results were inconclusive, and it wasn’t clear which components of the site were helping or hurting conversions. This type of result is fairly common in testing if a lot of changes appear in one variation, and it’s a stepping stone to further inquiry. 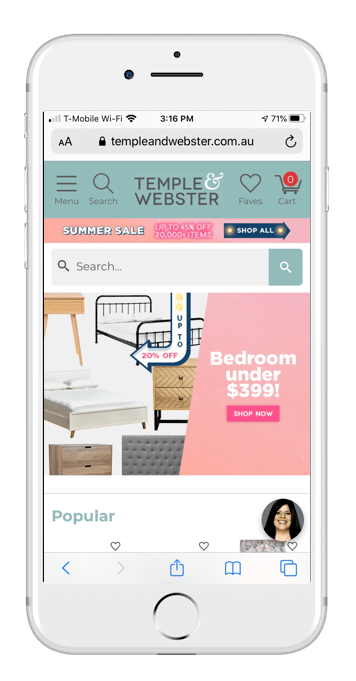 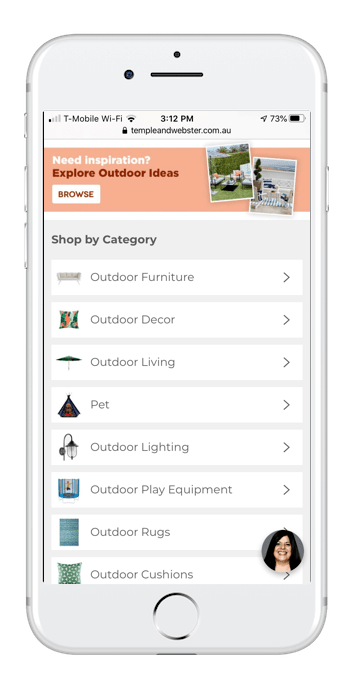 From this initial result, the team worked with SiteSpect to break down the new mobile page into smaller pieces, creating new variation groups for each change. Temple & Webster then rolled out each change on its own to learn the impact each element had both individually and in conjunction with other elements via multivariate testing. By isolating each change, the originally flat result took on a whole new shape. It turned out that just one element caused a negative turn in conversions, and that without that single element, the redesign increased conversions significantly.

With this knowledge, Temple & Webster not only fine-tuned their mobile page redesign, but also found a potentially problematic site component that they could move forward to test and then address site- and device-wide.

Since implementing SiteSpect, Temple & Webster have taken advantage of the breadth of capabilities it offers — using Origin Experiments© extensively, putting optimization in the hands of many departments, and collecting accurate and thorough data about their user experience. Brodie and Henriques emphasize the partnership with Section and SiteSpect consultants as key to their success.