When QuantCDN was looking to create a new type of content delivery network (CDN), it needed an edge provider that could deliver the required simplicity, performance and global reach. Section’s innovative Edge as a Service offered the right building blocks and flexibility without the cost and complexity of starting from scratch.

It’s often necessary to fundamentally rethink how we do things in order to advance. Such is the case if you’re going to upend the traditional CDN paradigm to dramatically improve website performance, security, and cost. And that was the objective in launching QuantCDN. 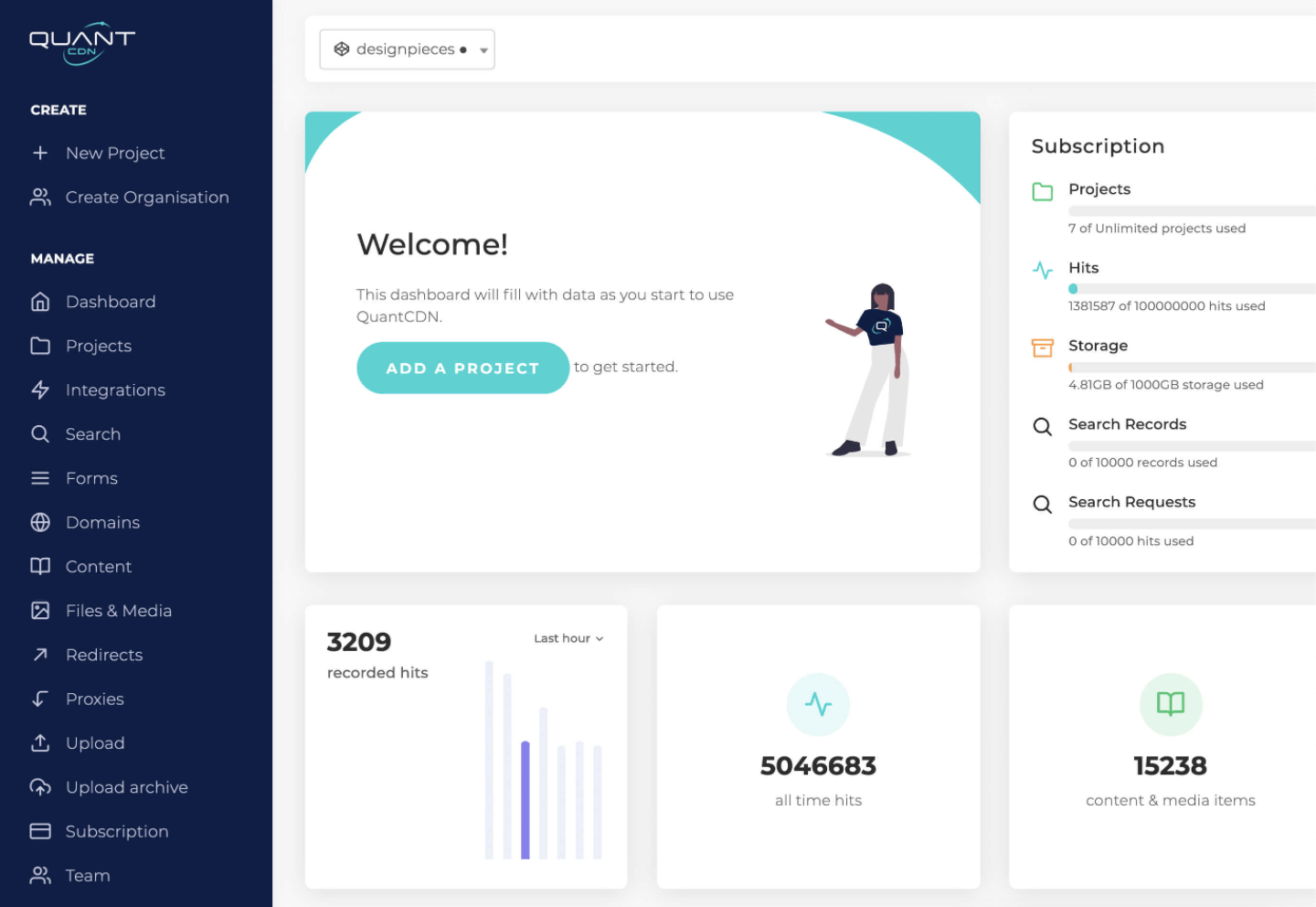 Modern websites are built around dynamic site content, meaning pages are generated from various components in response to user requests. Content becomes modular, and is managed through a content management system (CMS) on the backend and assembled in real time either by the server or at the browser.

The problem is dynamic content generation is relatively resource intensive, both in the backend databases and web servers needed to handle traffic, and in the latency it injects as pages are compiled. Moreover, it opens up the attack surface by allowing the insertion of malicious code.

Yet, in reality, most websites consist of relatively static content – content that is sitting on complex and expensive dynamic infrastructure. If this content was delivered as static, pre-assembled pages, it would significantly improve site performance and responsiveness, lower costs, and increase security.

That was the inspiration for QuantCDN. Founder & CEO Stuart Rowlands realized that for many organizations, from governments to major enterprises and brands, static content promised significant benefits. “The trick was to turn the traditional paradigm on its head,” explains Rowlands. “We needed to push content from the source the second it changes, and host it at the edge for immediate delivery in response to user requests.”

Rowlands and his team set about building the underlying technology, plug-ins and APIs needed to automatically track and push content changes from popular content management systems (CMS). But QuantCDN still needed a platform to host the static content.

“Part of the power of QuantCDN is that we leverage edge computing, so content is both physically closer to users, and can readily scale as traffic requires. That said, we’re a software company… the last thing I want my team doing is managing a distributed network.” Stuart Rowlands, Founder & CEO, QuantCDN

Fortunately, Rowlands had an ace up his sleeve: he already knew about Section’s Edge as a Service.

For QuantCDN, Section offered the robust framework the team needed to build and deploy its solution, without the complexity involved with other, alternative approaches. Rowlands also appreciates the observability in the Section platform, calling it “key” to maintaining the expected performance and accessibility of QuantCDN.

“We considered a range of solutions, but each represented a higher barrier to entry,” says Rowlands. “Section provided the right building blocks and flexibility without the burden and cost of assembling this from scratch, and the observability to ensure it’s all operating as expected.”

Among the benefits of working with Section, Rowlands and his team were able to leverage Section’s HTTP Extensions and Recommended Partner applications, which allows companies to combine pre-packaged security and performance solutions with Node.js or custom containers and serverless workloads. Thanks to Section’s flexibility, alongside the static edge, QuantCDN offers full support for traditional CDN functions such as caching, WAF, etc., so customers can use QuantCDN as a one-stop solution across a mix of modern and traditional projects.

“When I’m looking for a technology partner, the things that matter are stability, security, flexibility, support and relationship,” notes Rowlands. “Having worked with a multitude of cloud providers, Section has stood out by ticking all those boxes.”

In fact, for Rowlands and his team, the Section platform has become a central part of QuantCDN, and he only sees that growing in the future.

“Section is unique in the market. I can’t point to any other providers that offer the same level of flexibility and control. Section has taken the pain out of managing and scaling workloads across multi-region and multi-cloud, offering the right level of core complexity abstraction to build on.” Stuart Rowlands, Founder & CEO, QuantCDN

Going forward, the QuantCDN team plans to be at the forefront of helping organizations tackle increasing DDoS attacks and other site security risks, as well as challenges associated with increasing web infrastructure complexity, increasing costs, increasing traffic, and the ongoing shift to serverless workloads. Section promises to be integral to those plans.

“I only see Section’s uniqueness in the market increasing,” Rowlands notes. “As you go from running a select set of payloads to arbitrary custom payloads, the floodgates open in terms of what’s possible for a developer to do at the edge. Once you enable serverless workloads in any segment – with all the core complexities around scalability, global distribution, compliance, and even standardized costs all solved for – the headaches otherwise associated with a multi-cloud, multi-region deployment just go away.”

Rowlands sums up his experience by noting the close alignment between Section and QuantCDN in the problems they’re trying to solve. “Workload complexity and cost are only increasing, while users have steadily become accustomed to instant response – leaving organizations between a rock and a hard place,” he says. “That’s the challenge we’re trying to solve with content delivery, and it’s the same challenge that Section solved for us with their edge technologies.”