They had been running on legacy CDN Akamai for some time when they wanted to perform A/B tests by sending a portion of traffic to a new checkout and measuring conversion rates. After several weeks of frustration while trying to set up A/B tests with Akamai the team decided to explore Section.

Appliances Online first turned to Section to help them with performing A/B tests, which Section was able to quickly set up. The development team then got set up with Section’s local development environment and real-time metrics and saw that they would be able to cache HTML documents with Section, which they had not been able to achieve in Akamai due to the lack of ability to test changes before they went live.

Initially the team set up Section behind Akamai so they could successfully cache dynamic content. By leveraging Section’s DevOps tools they could see what was being cached and test changes in their local environment before pushing to production. The team also loved that they could iterate and test quickly, once testing and deploying 3 code changes in 10 minutes, which as they said “Would have taken half a day plus lunch with Akamai and we still wouldn’t know if it was working!”

After dynamic content was cached through Section, the next step was to turn off Akamai and cache all content through Section. This was a significant cost savings for Appliances Online so they were eager to make the switch, but there was some apprehension over the impact of turning off Akamai’s thousands of PoPs and moving to Section’s significantly smaller PoP network.

As the switch was made from Akamai to Section for all caching, Section and Appliances Online used New Relic Real User Monitoring Data to measure the impact of turning off so many PoPs. However, the suspense was quickly lifted as RUM showed that performance actually improved when traffic was switched to Section.

The graphs below demonstrate the performance improvement in network time and day-on-day trends. Since HTML was already being cached through Section, this improvement was not as dramatic as it would be if all caching was switched at once. During the switchover we also looked into how many PoPs out of Akamai’s network were actually being utilized by Appliances Online, and found that less than 10 of the global PoPs were actually serving cached content.

This makes sense considering that cached items are not shared between PoPs. If you had the same image or javascript file being ch PoP in turn you would have to make 100,000 requests for the same piece of content before you hit from cache. 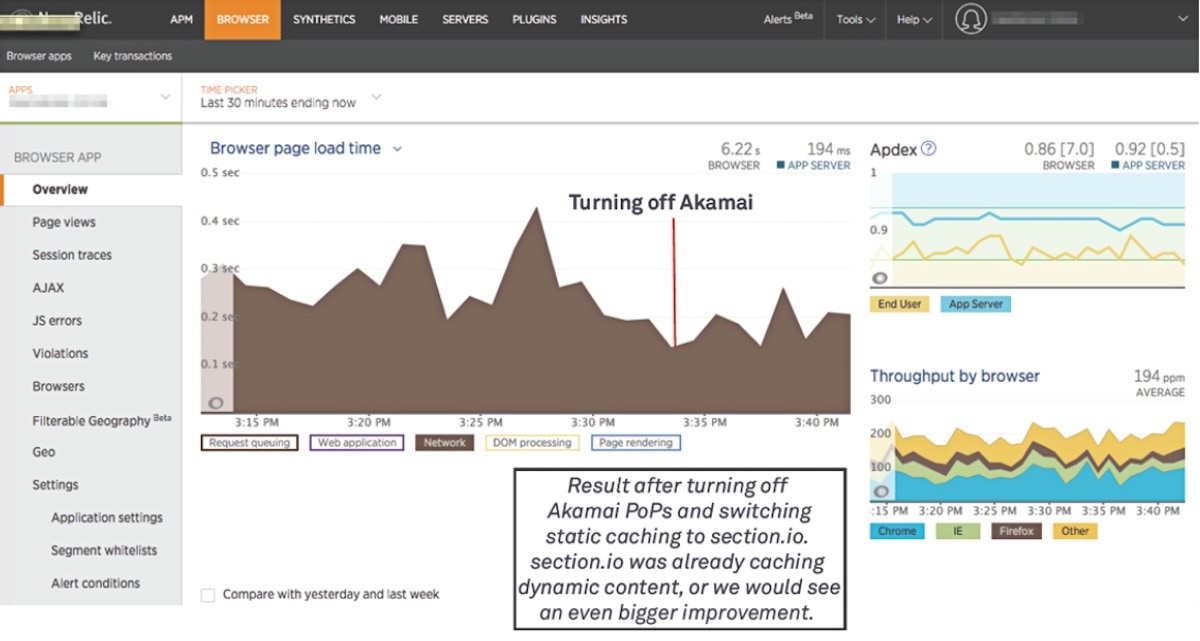 Since Appliances Online first began using Section they have enjoyed the improvement in development team efficiency and the ability they have to integrate their CDN and cache changes with their agile workflow. They have been able to configure Varnish Cache themselves to cache dynamic and static content, which gives them excellent backend and frontend load times. They have recently rebuilt some applications internally, and switching architecture with Section made maintaining high performance simple as the platform is compatible with both server side and client side methodologies.

5 Tips to Lower Your Bounce Rate