It’s no secret that Akamai is the elephant in the room in any conversation regarding CDNs. It is the grandfather of the industry, and pioneered the art of bringing content closer to end users to improve browsing experience for people all around the world. Their first-mover advantage allowed Akamai to build an infrastructure still unmatched in size and scale by any of their competitors.

Akamai’s infrastructure quickly became their greatest selling point. Thousands of points of presence (PoPs) distributed around the globe reduced latency and the load on a website’s origin, massively improving user experience during the age of dial up connections. No one could compete with the sheer size of Akamai’s network. During a time where the distance content traveled was paramount, their network size became an unbeatable competitive advantage. 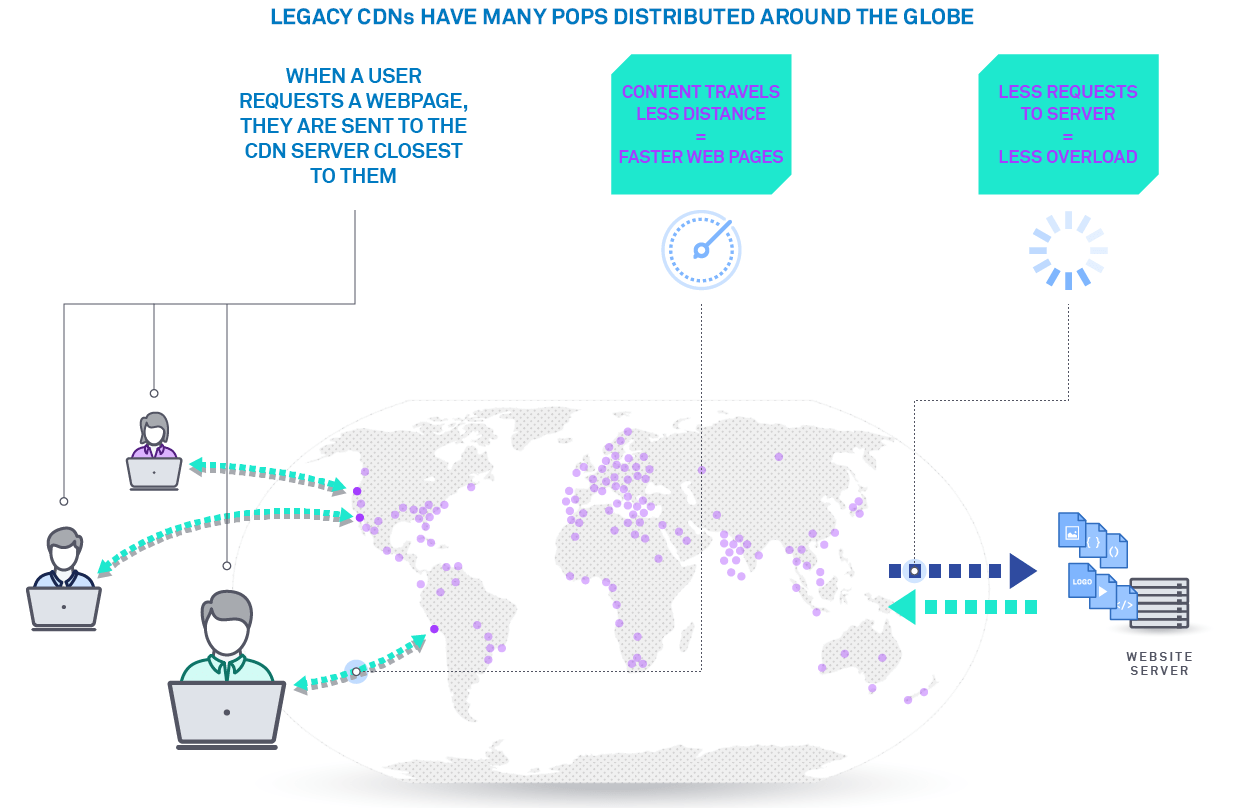 How many Points of Presence does your website need?

Yet, Akamai’s infrastructure was built for a pre-broadband world and what was once a great asset became a glaring flaw. As the internet sped up, latency caused by physical distance became less important, and the performance difference between a caching server ten miles away versus one hundreds of miles away was negligible. The name of the game became caching optimization, where performance was determined by cache hit ratios and caching more content, rather than content travelling a shorter physical distance.

New, modern CDNs built “super PoPs” with larger and more powerful servers located strategically along the backbone of the internet. By reducing the number of PoPs, the odds of a user requesting content that was already cached within their nearest PoP increased dramatically. Suddenly, Akamai’s massive network was actually inhibiting performance rather than improving it.

To break this down a little further, we should take a look at how caching works more closely. Caching servers only cache content that has already been requested by someone else. This is a way of intelligently prioritizing the content that needs to be cached by letting a website’s visitors determine which content is being consumed regularly. Because content changes on websites frequently, caching servers also only keep content for a specified amount of time before needing to return to the origin server to collect un-expired content. This ensures that the cache isn’t delivering outdated content if something at the origin has changed.

While increasing the number of caching servers in a CDN’s infrastructure does reduce the latency caused by physical distance, it also decreases the odds that content will already be cached in that specific PoP. While truly massive websites with a worldwide audience might still get the most value out of having a network the size of Akamai’s, most companies are going to be hurt by a network of Akamai’s size because their cache hit rate will go down.

Another flaw caused by Akamai’s large network is the complexity and time required to clear content from the cache. In the event of a website update, bug fix, or emergency security patch, it can take hours to clear the Akamai’s caching servers of bad content. More modern CDNs now offer instant cache clear allowing a user to purge the caches in a matter of seconds which is becoming a must have feature.

So what does Akamai do now? Brand recognition will continue to carry them for a while, but with more cost efficient and higher performing CDNs hitting the market, what will Akamai’s competitive advantage be going forward and how will they modernize their infrastructure to address the needs of today’s internet users? There are no easy answers to these questions, and in the future they will need to contend with software-defined networks that can provide the right balance of latency reduction and cache hit optimization that will deliver the best possible solution for each individual website’s traffic pattern. In the meantime, the writing’s on the wall for Akamai. Either innovate fast, or prepare for decline.

How Section and Akamai differ

Section’s Edge Compute Platform was built to alleviate the frustrations developers have with configuring and testing on legacy CDNs such as Akamai. By allowing websites to choose what caching and security proxies they run, configure them themselves, and test them locally, Section is redefining modern content delivery.